“A Monument to the Progress of the Times:” the Randall Building

Have you ever looked up, to the very top of the building on the west corner of Main and 5th, Newton? 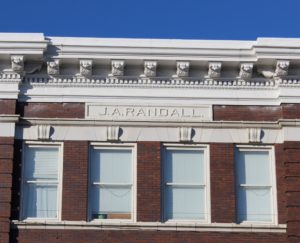 Ever wondered who J.A. Randall was and what did he do to get his name on a building? His story is closely tied to the early years of  Newton, Ks.

In 1872/73, at the age of 28, John A. ‘Jack’ Randall came to Newton to find his fortune. Born in Nashport, Muskingum County, Ohio, he grew up on the family farm. Once in Newton, he established a connection with the Santa Fe Land Office, and later, the  Muse & Spivey Lumber Co. and began buying and selling property in Harvey County. 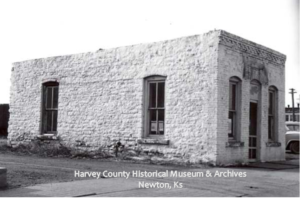 Shortly after his arrival in Newton, he purchased the lot at the corner of 5th and Main from Jacob Batdorf who had purchased the land from the Newton Town Company in 1871. 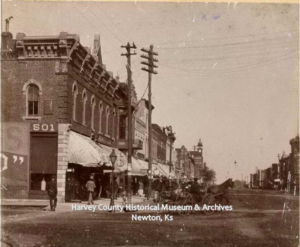 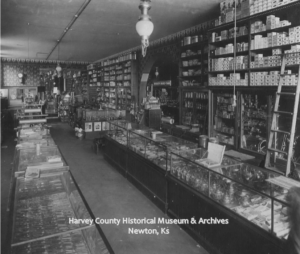 At about noon on a busy Saturday, F. G. Hensey, a plumber working for Evans Hardware in the back southwest corner of the building at 5th & Main, struck a match to light his pipe. “With the flash of the match came another flash, one which filed the room with flame.”  The entire block shook and a second explosion quickly followed blowing out windows.  The fire department was on the scene quickly and “within a half an hour all danger of a serious fire was was averted.”  Although badly burned, Hensey would recover from his injuries. It seemed a crisis had been adverted. 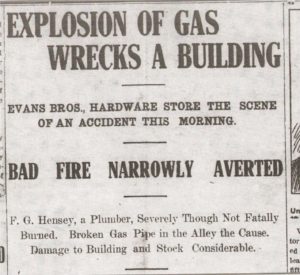 “A Seething Mass of Flames”

At four o’clock in morning the next day “one of the most threatening fires that has ever visited Newton in many years broke out.” The early Sunday morning fire was discovered by Mrs. Irving Kendall who lived in the apartment above Kliewer Bros & Adair Clothing Store at 505 Main.

“a hurried investigation revealed the fact that the Randall building, the scene of Saturday’s natural gas explosion, was a seething mass of flames. . . fire pouring from every rear north window of the building.” 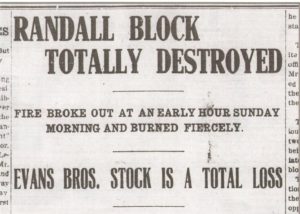 Several renters barely made it out of the burning building.  Mrs. Kendall suffered the most injury from smoke inhalation. The heroic efforts of many kept the fire from spreading to the next building.

“Raised on the Site of Ashes and Debris“

“The handsome building is a monument to the progress of the times, growing up as it did in the ashes of its predecessor, one of the pioneer buildings of the street, which was destroyed by fire.” Evening Kansan Republican, 22 April 1911.

A little over a year later a beautiful new building stood at the corner of 5th & Main. 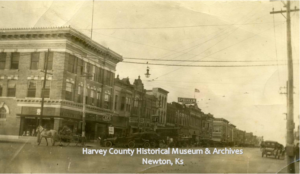 C.W. Terry from Wichita was the architect and F.C. Bordon, also of Wichita, was the general contractor. “The most elaborate building of its kind in Newton” cost $47,000.

“red pressed brick and white terra cotta trimming, three stories in height . . .Especially impressive is the heavy cornice which crowns the whole with beautiful effect, the white design contrasting artistically with the natural red body of color of the brick.  The cornice is by far the most elaborate job of its kind in Newton and is the work a of a Newton firm.” 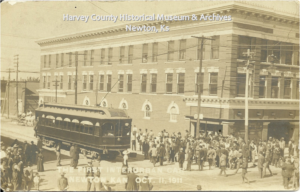 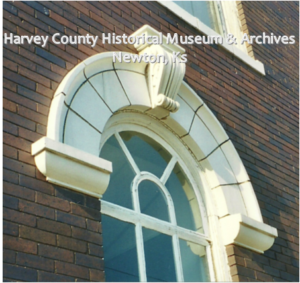 The interior was also “spacious” and the editor of the paper noted that “Mr. Randall spared no price to make these offices most pleasant in appearance and complete in all particulars.”

For 30 years J.A. Randall was an active participant in the growth of Newton and Harvey County through a variety of real estate ventures. He was also a stock holder in several Harvey County banks and the director of the Kansas State Bank beginning in 1902. At the time of his death in 1915 he was “well-known as one of the wealthiest men in the county.”

Described as  “a reticent man, with unassuming manner” Randall was well-respected in Harvey County.

“Though a public spirited man, Mr. Randall never sought public office and was not even a member of any lodge or organization, but his prudent  judgement of things of a public nature was sought by the citizens of Newton, and in all the projects he considered worthwhile he gave liberally.” 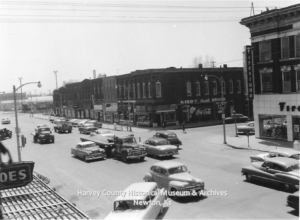 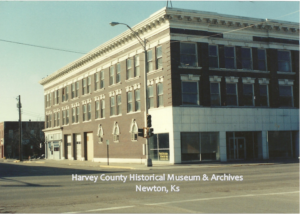 Later in life, Randall purchased a ranch ten miles north of Burrton where “he spent much of his time looking after the many details of the farm and it was one of his pleasures to continue to make frequent trips to the ranch.”

He died at his Burrton ranch unexpectedly on December 11, 1915.

He was survived by two brothers and a sister.  In his will he gave “generous bequests to several institutions of Newton” including Bethel College, Bethel Hospital, Newton Free Library and the Newton Y.M.C. A.

According to his obituary, Randall

“always had the interest of a public spirited man of the community, and when the building he owned at the corner of Fifth and Main street was destroyed by fire . . .  he replaced it after making trips to various cities to determine what would be the best material to use in every way, making the building, now known as the Randall Building one of the very best in Newton.” 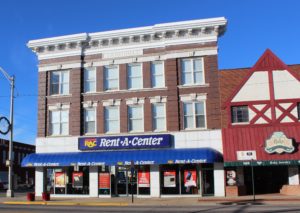