It started on Tuesday morning with freezing rain and sleet.  It ended on Wednesday afternoon and left behind a mess of downed trees and power lines. Listed number 3 on the National Weather Service’s “Worst Kansas Ice Storms,” the storm that began in the morning of January 4, 2005 and lasted until the afternoon of the 5th, coated nearly the entire state in two inches of ice. The counties of Harvey and Marion were hard hit. 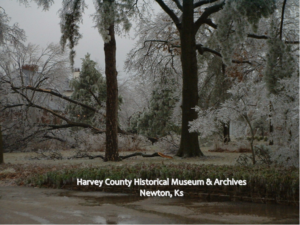 All day and into the night, the sound of the wind through the ice covered limbs, followed by the cracking branches and a crash as entire trees broke apart and fell under the weight of the ice, could be heard. Winds up to 20 mph caused weakened trees to break apart and huge limbs to fell to the ground.  Even the large, older trees were vulnerable to the wind and coating of ice. Trees up to 22 feet high broke and split in half during the storm. One resident noted that “it was quite a show, with all that falling, it sounded like gunshots all night long.” 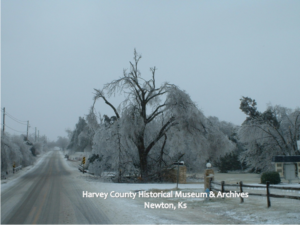 The  Newton Kansan reporter noted in the Wednesday edition that “today held evidence of a day of the most unusual sights and sounds, proving Tuesday was real.” A disaster emergency was declared for Newton and Harvey County. Weststar Energy employees worked through the night to restore power to as many as possible. Statewide more than 86,000 people lost power.  Newton, and Harvey County, was one of the worst hit areas with more than 12,500 people without power in the bitter cold. 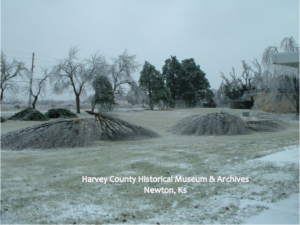 Reports from the other communities in Harvey County were just as dire. In Burrton, a fire destroyed a double-wide mobile home, and a house in Walton.  Just over the county line, a house in Whitewater burned.  Sedgwick was without power. Halstead experienced sporadic power outages that were a result of trees falling on private property and instead of the entire block losing power, only the individual homes went out.  This made the work of the crews go much slower. 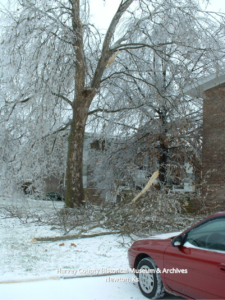 Fortunately there were not many injuries. A carrier for the Kansan was injured from a falling tree limb and was taken to the hospital. 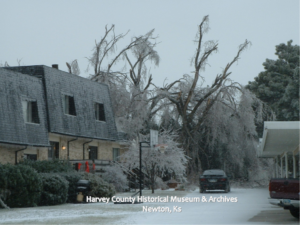 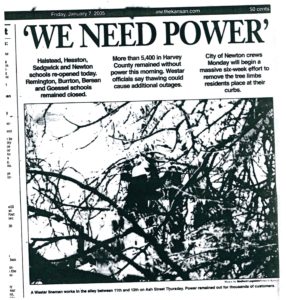 Things started to go back to normal for some by Friday, January 7.  Several schools had reopened including Halstead, Hesston, Sedgwick and Newton. Remington, Burrton, Berean and Goessel schools remained closed. However, many areas remained with out power including Walton and Goessel.  It was noted that they could be without power for up to 10 days as crews worked to restore power.  By Thursday about 200 electric crews from around the country had arrived to help.

A week after the beginning of the storm,  power to most homes and businesses had been restored. The clean-up of the debris left behind continued for some time.

Two years later, Kansas  again dealt with the another ice storm.  Listed number one of the five worst ice storms, the storm on December 10-11, 2007 affected nearly the entire state. Ice accumulations of 1-2 inches with “phenomenal 2-4 inch accumulations” in some areas. Although there were no fatalities, the damage to buildings, trees and power poles was extensive.  Some places were without power for up to 2 weeks.  Damage to the electrical infrastructure alone was estimated at $136.2 million, giving the storm the distinction of being the “costliest ice storm in Kansas history.”