Truly One of the Pioneers of Kansas: J.H. ‘Pap’ Anderson

Late summer and early fall in 1899 was a time filled with optimism about the future of Newton, Kansas. 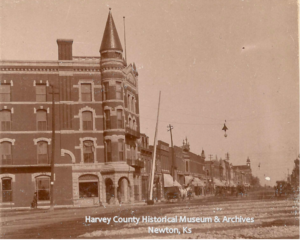 “Newton is  Entering upon a Career of Unexpected Progress, Unparalleled Prosperity. “

The Ragsdale Opera House was full to overflowing on a Monday evening in 1899 as a group of business leaders and citizens met to “consider the welfare of the city and provide for future prosperity.” Members of the Newton Board of Trade were on hand to report on their efforts and to secure more funds to promote the town. Prominent men, including S.R. Peters, H.W. Hubbard, J.C. Johnston, were on the board and had already contributed significant money. These men were the “Boomers,” promising the future growth of the community.

James H. ‘Pap’ Anderson was one of the most outspoken “boomers” on the Board. At the Monday evening meeting, he spoke of the need for an additional $75,000 to  be added to the what had already been raised.  By the end of the evening, the full amount was raised. The Newton Kansan gave much of the credit to James H. Anderson, noting that the group gave “three cheers for Pap Anderson” at the conclusion of the meeting. 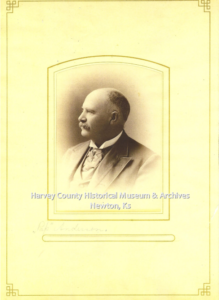 Anderson also invested.  The reported noted that he “was so confident the results would be in his favor that he put his last cent into real estate . . . “

For much of 1890, Anderson traveled around the country promoting Newton.  The Newton Kansan called Anderson “the most persistent worker and most enthusiastic friend that Newton has ever had.” When he returned to Newton in April. He was greeted at the train station by three hundred people “anxious to grasp the hand of the man who had devoted so much of his valuable time to the interests” of Newton.  At a “Reception and Banquet” in his honor at the Clark Hotel, he assured people that there would soon be results from all of the hard work and money.  His speech was frequently interrupted by applause from the audience indicating their “gratification.”  The event concluded at 11:30 pm with another “three cheers for Pap Anderson, Friend of Newton.”

Again in September 1890, Anderson returned to Newton to assure people “that in a very short time Newton would be a hive of industry.”

“Fortunes were swept away in an instant” 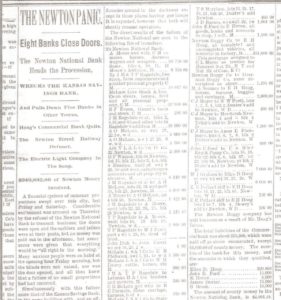 Thursday evening, November 20, 1890, “men who retired at night happy in the thought that they were on the road to wealth, awoke in the morning to find that the boom had busted and their wealth only a myth . . . the collapsing of the boom left him  [Anderson]  penniless.”

“Once a Man of Good Circumstance”

Trouble began to appear in fall 1896. Under the heading, “Mixed Politics and Business,” the Newton Kansan reported while selling his inventions in Logansport, IN, Anderson began to “appeal to people to vote for Bryan . . . because the single gold standard impoverished people.”  The report gave some background on Anderson noting that he came from Newton, Ks and was “once a man of good circumstance . . . and he has always been a Republican until this year. . . ”  The report concluded that while he had permission to sell his wares on the street, he did not have permission “for preaching free silver.”

“His One Queer Idea”

In October 1899, Anderson was arrested in New York for disorderly conduct outside of Helen Gould’s Fifth Avenue home.  He insisted that she was his wife and he needed to see her.  Gould reported that he had sent her 48 letters, addressing her as his wife. At that time the New York authorities sent him back to Kansas at some expense “where he was turned loose.”

His wife, Estella Berry Anderson, had remained in Newton while Anderson traveled. She died 10 June 1900. The writer of her obituary noted that “the family seems to have had more than its share of misfortune lately.”

In June 1901, Anderson was again arrested in front of  Helen Gould’s New York home, insisting she was his wife.  The authorities in New York, not wanting the expense of sending him back to Kansas a second time, committed him to Believue for “mental observation.”   Drs. Fitch and Wildman examined Anderson and noted that “he is sane on everything except the delusion that Miss Gould is his wife.” They  “pronounced him a hopeless lunatic” and recommended hospitalization. He remain in a Washington hospital until his death. 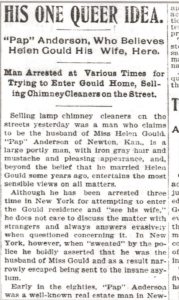 “Truly One of the Pioneers of Kansas”

Despite his difficulties in later years, his obituary portrays a hard working man that somehow was over come by the struggles of life.

His obituary gives some details of his early life.  James H. Anderson was born in 1835. During the Civil War, he was with Co. K, 5th Ind Calvary. Anderson married Estella Berry in 1868.  She had two children, Luella and Sebastian, from a previous marriage to Thomas Berry.  Berry had been killed at the battle of New Hope Church in Georgia on 24 May 1864.

“Took up a  Homestead”

The J.H.  Anderson family arrived in Harvey County in March 1871.  They homesteaded a claim in Macon Township, Harvey County, Ks.

[Anderson] “took up a  homestead . . . he erected a sod house for the protection of himself and wife, and with the aid of a team of oxen proceeded to break up the prairie and prepare the ground for the reception of seed.”

The couple had one additional child, Belle.

In the early 1880s, the family moved closer to Newton and for a short time, he ran a one-horse dray business. Anderson soon saw opportunities in real estate and he invested heavily.  The newspaper frequently referred to “Pap” Anderson as “the most enthusiastic man in the city . . .his faith in the success and prosperity of Newton is unbounded. . . “ and “he always backs his faith in the future events by his money.”

After the 1890 Newton Panic, Anderson was “penniless.”  He invented a chimney cleaner and traveled the country selling his invention.  During one of his travels, he saw Helen Gould, the daughter of New York financier Jay Gould, and became convinced that she was his wife.

Following his third arrest in 1901, Anderson was “confined in a hospital in Washington” until he died June 26, 1908. Anderson was survived by a daughter, Mrs. (Belle) Carl Sasher, and stepson, S. T. Berry.