Adequate for the Needs of the County: Harvey County Jails

Despite the early history of violence in Newton, there was not a county jail until 1880. Prisoners deemed “real bad men”  were either guarded or taken to prisons in another county. Less violent, “ordinary culprits” were locked up in “makeshift cabooses or allowed to come and go on their own recognizance.”  In 1879, “after much discussion and agitation” the county commissioners decided a county jail was needed.  The proposition issuing county bonds for a jail was put on the November ballot.  The proposition passed 997 in favor, 712 against.

S. Chamberlian contracted to build “a two story stone building with double tier of cells” for $5,975. The jail was constructed out of large slabs of Florence rock. Also included, two reservoirs on the east end of the building to retain water from  the roof and an apartment  for the “jailer and his family.” The jail was completed in 1880.

“Not the proper material to use in jail construction”

There seemed to be difficulties soon after completion. The contractor, Chamberlain, “lost considerable money . . . the reservoirs never proved a success and it soon developed that Florence rock was not the proper material to use in jail construction.” The rock walls created an unhealthy, damp environment.  In 1905,  “health officers . . . demand[ed] a new jail“ because of the poor living conditions.  When put on the ballot, the proposition failed in 1905 and a second time in 1908.

Another unforeseen difficulty was securing prisoners. A reporter observed that escape was not a challenge with “prisoners  able to dig out almost at will.”

The issue of a new jail was brought up several times between 1908 and 1916. The Evening Kansan Republican described the conditions in the jail and sheriff’s residence with the headline “County Jail is a Stinking Place.” The sheriff’s residence was dismal with poor ventilation and a single “flimsy wooden stairway” to the second floor creating a potential firetrap. The presence of bars, “jail fashion,” on the windows of the family bedrooms added to the danger. The editor warned that  “in the event of a fire which would almost instantly cut off the inside stairway, occupants of these bedrooms would be quickly roasted, like rats in a trap.” 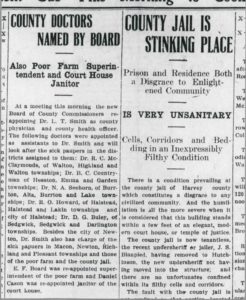 The cell block for inmates was also sub par with no heating system. The only method  to prevent prisoners from freezing was the use of “coal fires in some ramshackle old stove.”  The system of locking the jail cells was also complicated and required that the sheriff lock and unlock all the cells at one time. The article described the cells as “almost indescribably filthy”  and not fit even for dogs.  The conditions were not unlike what “one would expect to find  the prison pens of the south during the civil war.”

In an editorial in the Evening Kansan Republican, editor S. R. Peters described the jail and sheriff’s residence as “insufficient, out of date . . . neither safe, sightly nor wholesome.”  In addition to the health hazards he pointed out that “the present county jail is not secure and does not compare with the newly erected court house.” Peters concluded that “the county is in a prosperous condition . . . and there is no reason to believe that the slight tax of two mills on the dollar will be any less of a burden.”

Although inadequate “to cope with more modern methods of criminals” the building served as the jail until 1917, and even became something of a landmark in the community. Finally in August 1916 at a special election,  the proposition to build for a new jail passed 928 to 460.

“One of the beauty spots of the city”

D.S.Welsh demolished  the 1880 structure and several other local men were invovled in the  “landscape gardening” which made “the jail and court house premises really one of the beauty spots of the city.” The new jail was open for use in October 1917.

In 1921, some improvements were made including new cots and  replacement of the “soft steel bars . .  with tool steel ones, that are guaranteed against sawing.”  The reporter for the Evening Kansan Republican boasted;

“Even the fastidious Sedgwick county prisoners could find no fault with the county jail.”

“Adequate for the needs of the county” 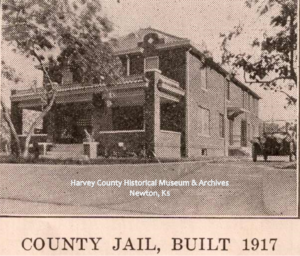 In 1922, the author of the section on  “Harvey County Jails” noted that “the present jail should be adequate for the needs of the county remainder of this century.  It is sanitary, strongly built, room, and ornate.  Ample housing for the jailer and family is provided. The elected county sheriff and his family continued the practice of living at the jail.  The last sheriff to live at the jail with his family was Earl ‘Russ’ Werner 1961-1965.  Werner was also instrumental in planning the new jail constructed in connection with the new courthouse in the mid-1960s.