Worshiping for 144 years in Harvey County!

Harvey County is home to many faith communities.  Some congregations are relatively new, while others have provided community and support for much longer.  Hall’s Chapel is one of the oldest congregations in the county.

One cornerstone of the Black community in Harvey County is the church – specifically Hall’s Chapel. The congregation has deep roots with beginnings in 1875 when the Methodist Church organized the African Methodist Episcopal Church in Wichita with a circuit to Emporia and Newton. 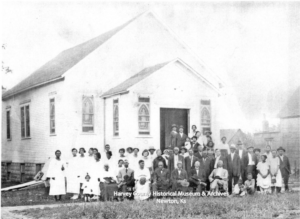 Charter member George Hall purchased a building from the Brethren Church in Newton.  The structure was moved to land he donated for a church at 200 E. 11th, Newton, Ks and the congregation became known as “Hall’s Chapel.” In 1921, a new building was constructed.

A second African American congregation, known as the Holsey Chapel CME, was form in 1882. In 1968, membership was in decline and members decided to join with Hall’s Chapel.

In 2005, Hall’s Chapel  built a new church at 711 E. 11th, Newton, Ks where members continue to worship. For over 100 years, Hall’s Chapel has provided a place to worship and served as a central part of Harvey County’s Black community.