A Piece of History: ‘Dog Tags’ from the Great War

One of the smallest objects in the museum’s collection  consists of two small  aluminum discs on a cotton string. The object may be small, but  tell a big story. 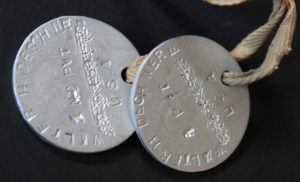 Not used officially in the U.S. until December 1906, the Identification Tag, or ‘dog-tag’ was a small aluminum disc worn around a soldier’s neck and included name rank and “USA.” Initially, only one disc was worn, but in July 1916, a second disc was added. The purpose of the tags were to aid in identifying the dead after battle.

These small discs are very personal objects that soldiers wore at all times –  relaxing with friends or in the heat of battle.  The Identification Tags might also be the last connection a family would have with their loved one.

We have several ‘dog-tags’ from Harvey County men who were in France during the Great War.  Walter H. Deschner was one man. 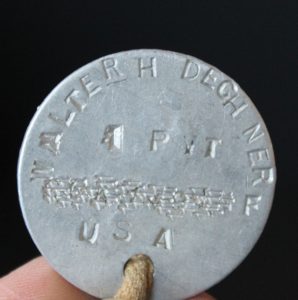 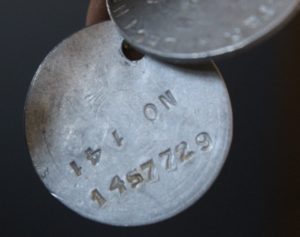 Before he left, his mother, Orpha, wrote on the front fly leaf of his Bible; “mother’s prayers will be often and many for you.“ 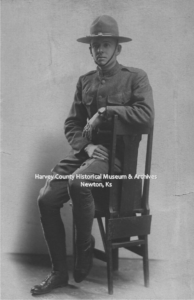 April 24, 1918  he left the US  on the Adriatic and roughly 40 days later arrived at Mellville, France. August 5, was his “first under fire”  experience in “No-Man’s Land in Vosgues Mountains.” On October 26 he was involved in the Argonne Drive.

Evening Kansan Republican often reprinted “soldier mail” and in the October 21 issue the editor noted “there were many smiling faces that were soon overshadowed as word was noised about that three of the Newton boys . . . had fallen.“

Frank Sheets wrote that he had been involved in the “big battle which had been raging for five days, and seeing Roy Barker *** lying dead beside the road.”

Sheets went on to describe the conditions he experienced, noting “he was five days and nights without time to change his clothing and said that a cold rain fell much of the time.”

These pages are from a Memory Book that Walter Deschner filled out highlighting his experiences while a part of the US Infantry. 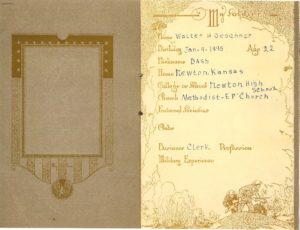 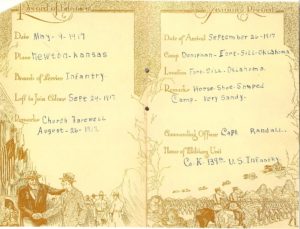 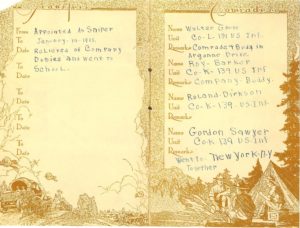 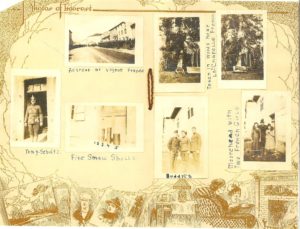 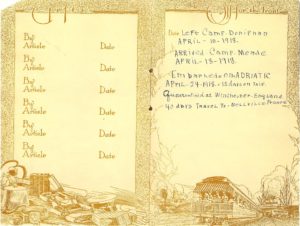 The same issue of the Evening Kansan Republican that had a letter from Sheets included one from Deschner.  He wrote that “he was back from the front safe and sound. . . . Leo Burgener was injured, but not seriously, but  Arthur Whitesell and Loren Finnell were both killed within 15 yards of him.” ***

Other battles he was involved in included Meuse-Argonne, and Verdun. He also noted the deathes of Whitesell and Finnell. 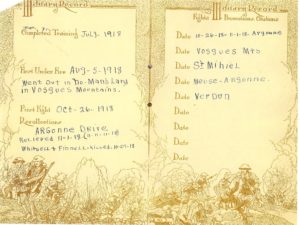 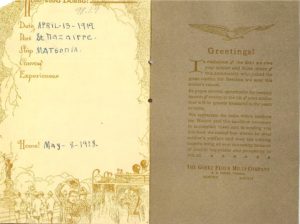 ***The report of Roy Barker’s death  turned out to be false, however both Arthur Whitesell and Loren Finnell were killed during the Meuse-Argonne drive. Both were from Harvey County.