Thank you to the family of Michael B. Adams for providing stories about their dad, a Harvey County inventor.

“Our father was always mechanically inclined and a problem-solving engineer who took great pleasure in “tinkering” – usually with engines and cars, making adaptations to better serve practicality – or on a whim or fun-loving idea.” 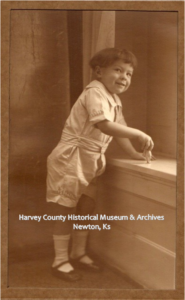 He attended Newton schools and graduated from Newton High in 1934.  He  met his future wife  Florence Hiebert, while attending Bethel College, N. Newton. After two years, he transferred to Kansas State University and graduated in 1939 with a degree in Mechanical Engineering. 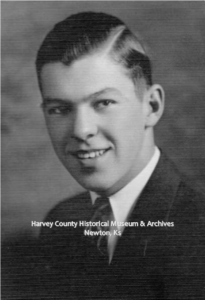 Shortly after graduation, Adams served in the Army Air Corps.  During WWII, he was stationed at Dum Dum AFB in Calcutta, India where he worked in aviation maintenance servicing the airplanes which flew over the Himalayan mountains. 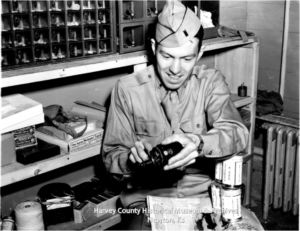 “Santa Fe All the Way” 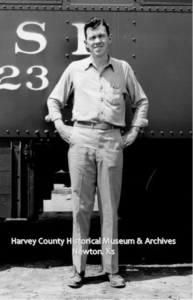 Following his time in the military, Adams returned to Kansas and continued his career with Santa Fe Railroad in Topeka.  During the span of his career he worked with the railroad’s transition from steam engines to diesel power.  As a result of his job, the Adams family lived in several different states including Texas and California.  While in Chicago, he was the Chief Mechanical Officer for the Santa Fe Railroad.  In the 1970s, to address changing fuel needs, he collaborated with a team to develop the Fuel Foiler—10 Pak.  The  lighter, more efficient Fuel Foiler was developed in response to the fuel shortages and increased cost of fuel in the 1970s. The invention improved the transport of  freight by rail. 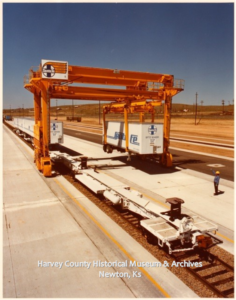 From the initial idea by a few Santa Fe engineers, this rail transportation concept improved the efficiency of the Santa Fe’s growing freight transport business, and beyond that, the rights to the design were eventually sold to other companies for further development and manufacture. 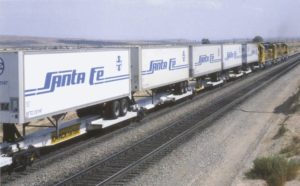 Adams’ inventiveness and ingenuity was not limited to his career. A favorite story involved “Emily”, his first love, a Model T Ford that was “named after Emily Post, (because the car was so well mannered?!)” In one instance, to solve the problem of a missing radiator cap,  he used a tomato juice can.

“When the car overheated or the road was rough, he enlisted the help of his passenger, with a long stick to reach forward and keep the can in place.”

In addition to ‘Emily,’ Adams enjoyed working on unusual cars, including  two early Studebakers, two Peugeots and a Renault. He enlisted the help of his two sons in one project.

“A lengthy and special project was the overhaul of the Peugeot engine in the garage of our home. We completely dismantled the engine, cleaned and rebuilt with new parts, and learned first hand the workings of the internal combustion engine. We recall one little bit of ingenuity we needed. Since we didn’t have an engine hoist, usually used for this task, we removed the entire front axle and steering gear from the car to get access to the bottom of the engine.”

“a creation of Dad’s to solve the classic problem of 3 kids in the back seat of a car during road trips. He built a wood platform on the floor to cover up the hump in the floor of the 1957 Dodge so the three of us could sleep back there, one on the floor, one on the seat, and one on the back hat shelf. This of course was long before child car seats became popular, much less the use of seat belts!”

Throughout his life, Adams enjoyed do-it-yourself projects.  He shared this love of creatively inventing with his children from building a Soap Box Derby race car to overhauling car engines in the garage. 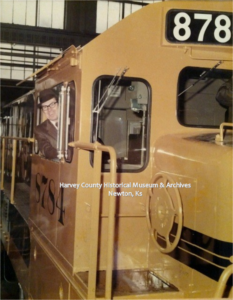 Michael B. Adams and diesel locomotive.

For the exhibit, the Adams family  loaned the museum a model of the Fuel Foiler 10 Pak invented in 1980.