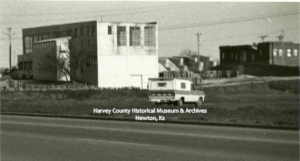 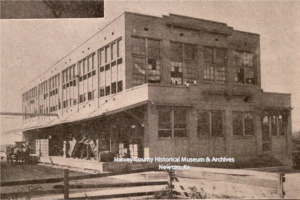 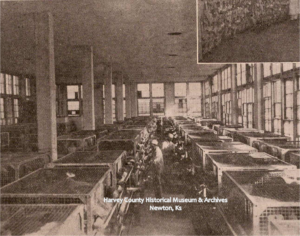 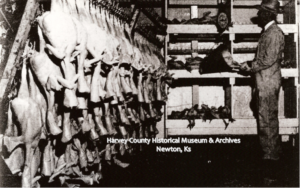 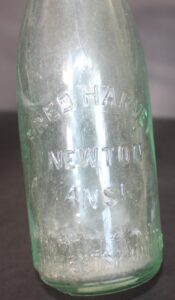 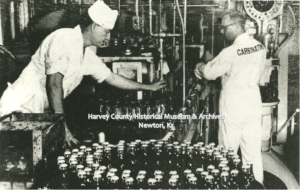 Today, the large  building just east of Sand Creek on west  First stands mostly empty, a reminder of a thriving business that revolutionized food service for the traveling public. At one time, the Historic Fred Harvey Building was an important cog in the Fred Harvey System providing fresh food for passengers and diners throughout the western part of the country. From the beginning Fred Harvey was concerned about providing quality food and drink to his customers.He insisted on fresh food and friendly, efficient service at each of his establishments. The Fred Harvey Farm provided the fresh food and drink for many restaurants in the system.

In about 1905, the Fred Harvey Company moved facilities from Kansas City, MO to Newton, KS to a location on west First near Sand Creek establishing the “Fred Harvey Farm.” 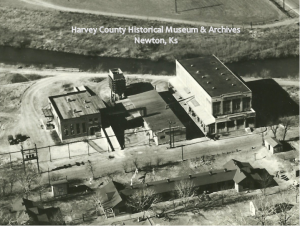 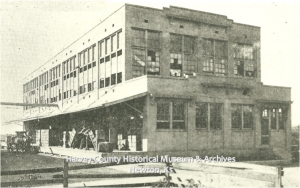 Fred Harvey Produce. East side of the poultry and carbonating plant. The men on the dock are hauling wooden cases of bottled pop. Mike Hurley Collection.

At about the same time another business pioneer was developing another product.  In 1891, Asa Candler, an Atlanta pharmacist, purchased the formula for a new drink, Coca-Cola.   Candler took advantage of Atlanta’s position as a transportation hub by shipping only the syrup across the South.  By shipping only the syrup, and not the finished product, he was able to keep costs down. The company began selling bottling franchises in 1899 and in doing so, avoided the additional costs of a physical structure that bottled the product.  They also side-stepped the challenge of finding the product’s main ingredient – clean water.

In 1914 the two pioneering companies joined together when Coca-Cola issued a franchise to the Fred Harvey Co. to bottle Coca-Cola at the Newton facility.

Inside the Carbonating Plant 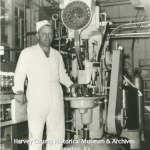 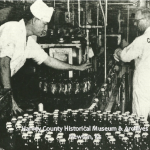 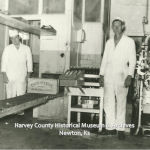 As was the case in all other aspects of the Fred Harvey system, quality was stressed.  Coca-Cola ran lab tests every six months to make sure that the end product was meeting their standards. A State Health Inspector would often pull a bottle at random from various cases ready to be shipped to test. 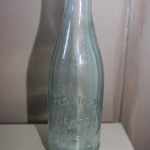 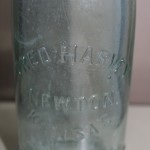 The soft drinks from the Fred Harvey Farm in Newton were sold exclusively in Fred Harvey dining facilities, newsstands and on Santa Fe passenger cars.

1918 was a peak year for Fred Harvey operations with fifty-four lunch rooms, thirty-seven dining rooms and twenty-six hotels in an area that included Chicago, California and Texas. During this time, the Fred Harvey Farm in Harvey County covered 500 acres and employed 150 people. In 1921, 60,000 gallons of milk, 20,000 gallons for cream, half a million pounds of poultry, a half a million dozens of eggs and 45,000 cases of soda were shipped. 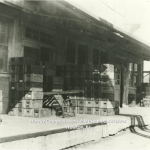 Dock on the south side of building with crates ready to load, 1952. Mike Hurley Collection. 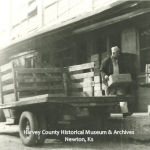 The Fred Harvey Farm ceased to operate in 1960.

Note: Fred Harvey died in 1901, but the Fred Harvey Co continued under the direction of his children.  For more information on Fred Harvey see:  http://www.kshs.org/kansapedia/fred-harvey/15507.