Part 1 of the history of the Clark Hotel can be found here.

In 1892, George Clark retired from the hotel business for health reasons. Thomas J. Simpson from Fredonia, Kansas “assumed charge of Clark’s hotel.” For the next 20 years, the impressive building at the corner of 4th and Main would undergo changes in management and ownership and eventually be condemned and torn down. 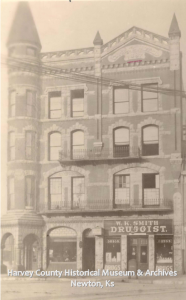 The Newton Daily Republican announced improvements and changes to the Clark Hotel in January 1894, noting that with these improvements “it has become thoroughly popular with both residents of Newton and the traveling fraternity alike.” Under the direction of hotel manager, F.D. Van Duyn, the steam heating apparatus was refitted and in “perfect working order.” Other improvements included retouching the walls, new furnishings. “A handsome upright piano, a new parlor set and appropriate pictures” improved the parlor on the first floor. Forty rooms were repaired and re-papered. Meals were “served in the highest style of the culinary art, the best the market affords being drawn upon to supply the tables.” There were also four separate cottages near the main hotel that served as extra rooms when the hotel was crowded. 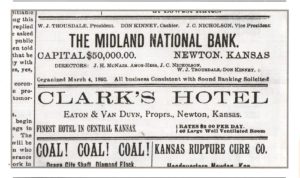 A year and a half later, the Clark Hotel had a proprietor, E. Horan.

“E. Horan who lives a mile south of Newton and is< well known in business circles will take charge of the Clark Hotel . . . Horan was one of the most successful hotel men of Canada.” (Newton Daily Republican, 29 July 1896)

E. Horan was involved in other business ventures in the area.  He came to Harvey County in the mid-1880s and established a farm and was involved in breeding and racing horses. 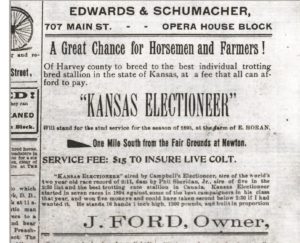 In spring 1897, the Newton Daily Republican reported that the last meal was served at the Arcade Hotel.  This prompted Horan to make “extensive improvements “ at the Clark Hotel.  The improvements cost $400 and included fifty rooms.

“Realizing that the Clark must handle all the old Arcade business, the enterprising proprietor of the house, Mr. E. Horan, is making numerous changes and additions to the house . . . to meet the increased demand of public.” ( Evening Kansan, 1 June 1887.)

In December 1898, it was announced that the Santa Fe Railroad had purchased the Clark Hotel.  A written notice signed by representatives of the Investment Trust Co. and the Santa Fe, was sent to E. Horan, proprietor, indicating that he had sixty days to vacate the building.   Horan noted that he held a lease agreement good until April 1, 1899 from the trust company.  He refused to vacate, noting that he had furniture and contents valued at $1,500 that could not be moved quickly. 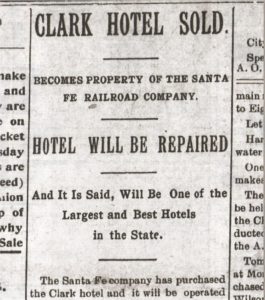 Over the next few months, E. Horan remained stubborn and refused to vacate the building. In February 1899,  the Santa Fe brought an “ejectment suit” against Horan.  Branine & Branine, representatives for Horan, “attempted to show that the Santa Fe had no legal right to purchase the hotel and were therefore in no position to bring a suit of ejectment.” The case went to jury and the verdict was in the Santa Fe’s favor.  E. Horan responded that “he has not been used in the right manner by the Santa Fe and now that he is in possession of the hotel he intends to hold it until the sheriff puts him out.” He also appealed his case to the district court and if “necessary . . . take the case to a higher court.”   Next Horan claimed that the Santa Fe “was not the legal owner of the Clark Hotel at the time the first notice was served . . . to vacate the hotel.”  Roughly two weeks later, the Santa Fe and Horan were able to come to a compromise.  Horan would be able to purchase the furniture for an agreed upon sum and he would vacate the hotel by April 1.

On Tuesday, March 28, the editor of the Newton Daily Republican noted:

“Sunday was the dullest day at the Clark Hotel since E. Horan has taken possession. .  . . . Mr. Horan has commenced tearing up the furniture and carpets . . . and will have everything moved out by April 1.”

The last breakfast was served at the Clark Hotel on March 29, 1899.

With the closing of the Arcade and the Clark, available rooms were limited. 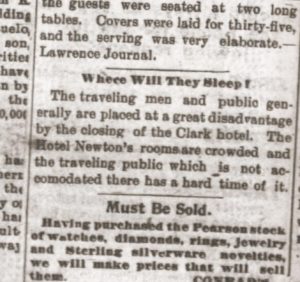 The Clark and Santa Fe

Initial plans under the ownership of the Santa Fe  included the renovation of both the Clark Hotel and the Arcade. In one plan the Arcade would house the dining room with rooms for “roomers and the hotel help and the Clark hotel would be retained strictly for transient trade.”  One proposal even included a walkway between the two  buildings which would be a “light steel covered affair to accommodate people wishing to go from one hotel to the other without going into the open air.” None of these plans became reality. Instead, the Santa Fe used the upper stories of the Clark Hotel building for offices and the  Fred Harvey General Store was located on the lower floor. 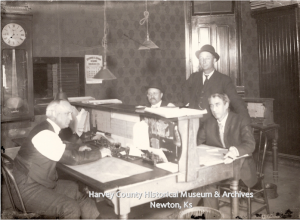 For the next 14 years the building served as headquarters for the Santa Fe railroad.  The “spacious dining room was partitioned off into suitable rooms, stairways were blocked and rebuilt, the sleeping rooms were changed and hallways rearranged.” Over the years, the structure deteriorated and by 1913 it was “well known . . .  that the office building was badly in need of repairs.” In a letter published in  Evening Kansan Republican  Judge Bowman noted that “the building [Clark Hotel] became wind shaken and the officers fearing a wreck vacated the building.” On April 19, 1913, the Santa Fe moved the offices to the Dotson Building on East 5th.  Initially, the move was temporary, “pending the completion of repairs on the old quarters.” However, the needed repairs proved more extensive and expensive than the Santa Fe expected and the once grand landmark was slated to be demolished.

Work taking down the building began on April 23, 1913 and 56 year old Chris Haman, who not only helped with the construction of the building, but also worked as a baggage master in the hotel, was there to watch, noting he “never expected to live to see the building torn down.” 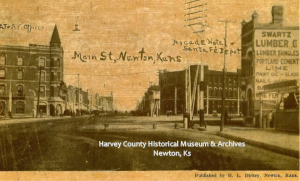