Something of a Mystery

Recently, the museum was asked to install an exhibit at the Newton Public Library for the months of November and December 2014.  The exhibit Main Street Miniatures, includes a set of five  dioramas with scenes from Newton history. 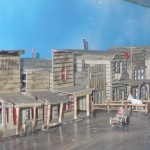 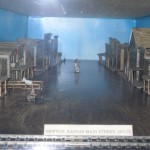 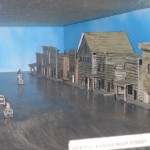 The diorama of Newton’s Main Street is on exhibit as part of our on-site exhibit, Stuff We Love.  The other four are on exhibit at the Newton Public Library.  While working on exhibit preparation, we noticed that none of the dioramas had information on who made them or when they were made.  Instead, there was a mystery.

A number of years ago, before any of the current staff or volunteers were involved at HCHM these dioramas came to the museum in an interesting way.  Over a period of time, a diorama was left at the front door of the museum with no additional information.  At that time, we understand that a newspaper story was written asking for information on the mysterious diorama builder, with no response.

The subjects of the dioramas are:

We are again asking to see if the creator of the dioramas is now ready to come forward.  We would really like to know who made them, when and perhaps why – was it for a special occasion? a hobby?

The dioramas are on exhibit at the Newton Public Library in November and December. In addition, one of the WPA Kansas Museum Project Dioramas and a model of the first AT&SF Depot in Newton are part of the exhibit.