Shortly after our exhibit, 50 Years of Service: the Harvey County Courthouse, opened in March, the museum received a letter from a long time HCHM supporter, John Wiebe. 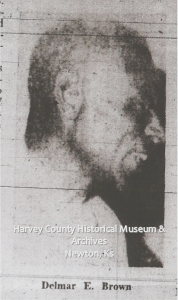 According to Mr. Wiebe, Brown “was a very friendly person always smiling.” Wiebe recalled that often on his way to Newton High School, he “would cut thru the old courthouse.  Delmar would greet all the kids and let them warm up in the cold weather.”

Delmar E. Brown was born in Chase County, Kansas on June 1, 1898.  His parents, Jerry M. and Corean Brown, lived in Cottonwood Falls.  On November 17, 1920, he married Ethel M. Morris in Newton, Ks.  She had grown up in Strong City, also in Chase County.

In the 1938 Newton City Directories, the Brown family is living at 529 W. 6th, Newton in a house that they owned.  Delmar is listed as a janitor and Ethel as a maid. The couple had three daughters, Lois Irene (16), Wanda Marie (14) and Emma Jane (12).  Also during the late 1930s and early 1940s, Delmar worked at Regent Barber & Beauty Shop, which was located at 518 Main, as a “shine.” The Brown family were members of the 2nd Baptist Church in Newton.  Delmar was also a member of the Rising Sun Masonic Lodge of Newton. By 1948, Brown is listed as the courthouse custodian, a job he kept until he retired in 1965.  During his nearly 20 years as courthouse custodian, Mr. Brown no doubt learned to know every secret of the old building he faithfully cared for.

To Wiebe, “Delmar Brown is forever connected to the old courthouse in Newton.” 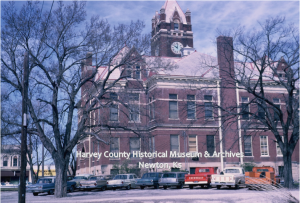 Harvey County Courthouse, “back side” looking west toward Main..

Thank you to John Wiebe for taking the time to write down his memory of Delmar Brown and then to share it with us.

The Regent Barber & Beauty Shop, 518 Main, Newton was owned by Lee Hendryx according to the 1940 City Directory.