The Building at 815 Main

In the early 1880s, Newton was growing.  The ‘rougher’ cowboys and the businesses associated with them had moved south to Wichita with the cattle trade.  Town leaders focused on building a community with stable businesses.  Several businesses were soon established along Main, just north of the railroad tracks between 5th and Broadway including banks, hotels and general stores.  The Ragsdale Opera House at the corner of Broadway and Main was completed in 1885.  North of the Opera House there was still plenty of room for businesses.  The First Methodist Church was located at the corner of 7th and Main. The new Harvey County Jail had just been completed between on the east side of Main between 7th & 8th, otherwise few businesses had moved that far north.  There were opportunities for growth in Newton, Kansas.

“Luxemberg, Germany,” arrived in Newton Kansas.  He must have been skilled at working with metal because within four years he established the Newton Cornice and Tin Works at 815 Main, next door to the Bretch Building which was built in 1888.

Bergh married Jeanette Dreyfuss on 23 November 1887 and they had two children. 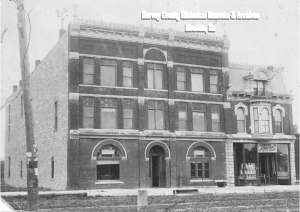 Bergh operated his business until 1918, when he retired.  His obituary stated that “he was the owner of the largest cornice and metal works business ever constructed in Newton.” Bergh died in 1933 at the age of 71.

Over the years, the building at 815 Main has been home to a number of businesses. Often the second floor served as apartments. 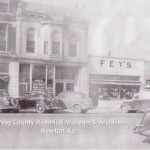 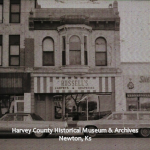 In 1971, it became the location of Cuellar Sewing Machine Co. Rosalio ‘Russ’ Cuellar grew up in Newton.  After graduating from Newton High, Cuellar worked for the Santa Fe Railroad, but soon he was looking for another opportunity.  He started working for the Singer Sewing Machine Co as a salesman and technician.  By 1967, he was able to open his own store in Newton. Four years later, he became the “first Hispanic business owner on Main Street in Newton” when he moved his business to the building at 815 Main. 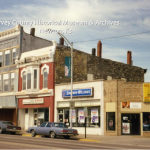 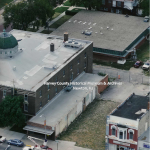 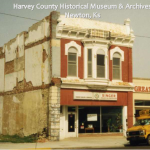 In addition to his business, Cuellar served as a court interpreter and was active in various community organization and Our Lady of Guadalupe Catholic Church.  He married Judy Macias in 1951 and they had six children. Cuellar died in 2010 at the age of 79.

In 2003, the building at 815 Main was included in “Main Street Historic District No 2” on both the National Register and Kansas Register of Historic Places.  At that time the building was described as an

“elegantly designed building . . . one of the eye-catching gems of Main Street.  It has a three-sided bay window, topped by a cast iron railing; above a metal cornice with urn finials at each end, and a Mansard roof.”

The architectural style and details were described as follows:

“This two-story, three-bay masonry building dates between 1886 and 1896.  It is one of the more high style Italianate buildings remaining on Main Street.  The ground floor has received some alterations, but it retains the door to the upper floor.  A substantial cornice separates the first floor from the second.  On the second floor, there is an ornamented, projecting three sided bay.  The front window opening is arched, and the two side windows of the bay are long, narrow rectangles.  The top of the bay is surrounded by a bracketed cornice, above which is a cast iron railing.  The windows on either side of the bay are also in arched openings, but unfortunately, all of the arched windows have been removed and replaced with flat top windows.  Above these arched windows are particularly ornate cornices. The second floor is capped by a large decorative bracketed metal cornice, featuring urn finials on each end.  Above this is a diamond patterned shingle roof, which looks like the bottom section of a double-pitched mansard roof.  There remains one metal cornice cap at one end above this shingled section.  The 1896 Sanborn Insurance map indicates that this was a three-story building with a framed roof, and shows a dwelling on the second floor and furnished rooms on the third.  The 1915 maps shows a third story, which this building appears to share with the three story building next door at 813 N Main as the Bethel Business College.  The adjacent three story building was demolished some time after 1963 [The building was demolished in 1994].  “The south wall of the current building, which would have been the party wall between the two buildings, is now stuccoed.  It is probable that the rest of the mansard roof was removed at the same time as the demolition of 813 N Main.  The north wall displays its limestone construction and retains two chimneys.”

Today, the building is empty.

The space has been re-imagined to a area for food trucks to gather.