“The case will come up for trial next month and will undoubtedly excite more interest than any other criminal case in Harvey County in several years.”

In the spring of 1902, people in Harvey County eagerly followed the case of a near fatal shooting that involved two young men in Harvey County, John Moulds and Taylor Gillespie. Even though they were neighbors, the animosity toward each other was well known. Once the case went to trial, the case also pitted two well-known Newton attorneys against each other, Charles Bucher of Branine & Branine for the defendant, and H.C. Bowman, County Attorney for the State. 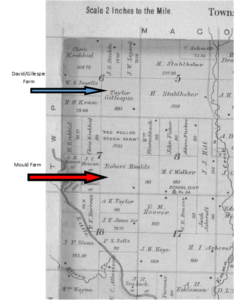 “between Mr. Moulds’ son, John and Mr. David’s step-son, Taylor, bad blood has existed for some time. Just when the trouble began is difficult to learn, but neighbors have known for a long time . . .”

Trouble had been brewing between the two men for some time for unknown reasons. Gillespie lived on a farm with his mother and stepfather, Howard & Emily Gillespie David, across the road from the Moulds farm where John lived with his father Robert.

In February 1902, the bitterness between the two intensified and there were several incidents. Notably one involving a valentine. “Moulds received an ugly valentine which he supposed had been sent by Gillespie and Gillespie in turn received a caricature by mail.”

A second incident occurred three weeks before the shooting. Gillespie was involved in a fight in front of a Halstead business, “in which Moulds was badly worsted.”  Later that same night, John, with his brother Carl, “turned the tables on Gillespie” when they met on the road between Halstead and their homes. “After exchanging hot words indulged in a fight in which Gillespie was badly pounded about the face.” Gillespie reported the fight, but nothing was done as the sheriff had “some doubt as to just which one was the aggressor.”

Nothing further happened until Friday night, April 18, 1902, after a program at the Kemper District School.

The next morning the county papers detailed the events of the conflict that almost cost and young man his life.

“Handy With A Gun”

“A shooting affray occurred at the closing exercises given in the Kemper District, four miles east of Halstead last Friday night and as a result, Taylor Gillespie has since been hovering between life and death from the effects of a bullet in the abdomen fired from a 32-caliber revolver by John Moulds.” (Halstead Independent. 17 April 1902)

Around midnight, Gillespie went to untie the horses in preparation to drive his parents home from the event. He went back to the front of the school to get his parents, where he met Moulds. Angry words and blows were exchanged. Moulds drew his revolver and struck Gillespie with it. Moulds went with his brother, Carl, back to the hitching posts. Witness reported that Gillespie then accosted Carl while the brothers were working with the horses. John was on the other side of the team and came around and confronted Gillespie.

Words were exchanged, Gillespie “quick as a flash . . . struck out and hit Moulds.” Moulds “without warning drew his pistol, and striking with his left hand, discharged the pistol with his right. Gillespie fell to the ground.”

Gillespie was “hastened to town after surgical assistance.” An examination by Drs. Hertzler and Huntberg revealed that the bullet “had made four holes through the large intestines. . . . Every possible attention was given to the injured man.” The bullet was never found.

John Moulds was arrested and was out on a $3,000 bond paid by his parents by April 17. The editor noted; “Moulds does not seem to realize the serious nature of his crime but has retained Branine & Branine to conduct the defense.”

John T. Moulds was charged with assault with a deadly weapon with intent to kill Taylor Gillespie.

The attorney for John Mould was Charles Bucher from the well-known Newton firm Branine & Branine.  Attorney H. C. Bowman, respected for his “gravity and acumen,” was the prosecutor.

The preliminary hearing has held on April 25, 1902 in Justice Hedges’ court. The nearly twenty-five people in the court room attended the trial “mostly out of curiosity.”

Also in the courtroom, with the defendant, were his parents Robert and Alice Moulds.

The reporter again observed that “Moulds did not seem to appreciate the enormity of the offence with which he is charged, although at times he appeared to be a trifle nervous.” (Evening Kansan Republican, 25 April 1902)

M. Howard David was the first witness called to speak on behalf of his stepson, Taylor Gillespie. He “gave a graphic description of the affair at the schoolhouse, although he did not see all of it.” Mr. David asserted that he was not more than three feet away when the actual shooting took place and saw Moulds’ left arm go up while discharging a pistol with his right hitting Gillespie.

He recounted how he rushed “up to the prostrate form of his step-son and asked if he had been shot. Gillespie replied that he had. David then picked up the wounded man and carried him to the nearest buggy. ” He intended to take Gillespie home but was forces to stop at the home of H.B. Steele, his stepson’s “condition having become so painful and dangerous that he dared not go farther. Doctors were summoned with haste.”

Sheriff Masters was the next witness, and he identified the Moulds’ pistol as an Ivers Johnson, caliber 32.  The final witness was Dr. A.E. Hertzler, one of the physicians called to care for Gillispie. He described the nature of the injuries caused by the bullet.

Judge Hedges decided to hold the defendant for trial at the May term under a bond of $3000 which was “immediately furnished by the father and mother of the defendant and the young man will enjoy his freedom while his trial is pending.” 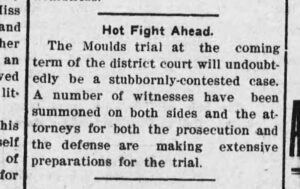 The Trial Promises to be a Sensational One.

On May 15, the trial of John Moulds started. The Evening Kansan Republican reporter noted that “a large crowd was in attendance at the courthouse today . . .. The trial promises to be a sensational one and the attorneys on both sides have prepared for a stubborn fight.”  Forty-nine witnesses had been subpoenaed. County Attorney Bowman began the examination of witnesses. The cross examination for the defense was conducted by Charles Bucher. The reporter observed that it is “evident that the attorneys for Moulds will endeavor to prove that the shooting was done in self-defense.”

Large crowds were in attendance throughout the trial. The Newton High sophomore class attended the trial one day, and the next day the freshman class.

The attorneys concluded their arguments at noon on May 17 and the case was given to the jury. At 4:00 a verdict of “not guilty” was delivered.

“Thus ends one of the hardest fought criminal cases Harvey County has ever witnessed.” (Evening Newton Kansan, 17 May 1902) 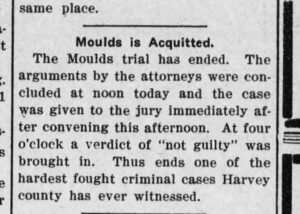 The David family, along with Taylor moved to Stafford, Kansas in July.

Taylor Gillespie went on to be an engineer with the Union Pacific Railroad. He married twice and was survived by his second wife, Mabel L. Gillespie. He died on Julie 24, 1954 at St. Mary’s Hospital in Kansas City MO, and is buried in the Highland Park Cemetery, Kansas City, Wyandotte County, Kansas.

John Moulds married Mittie David Boggs Mould on February 16, 1904. He continued farming for many years and later worked as a supervisor of the federal works program in Harvey County. He died September 24, 1962 and is buried in the Halstead Cemetery.