Thursday, March 1, 1888, started out like any other weekday.  Later, people recalled that

“there was a calmness that seemed to pervade the atmosphere. There appeared to be no movement in the air whatever and the people moving about were conscious of an oppressed feeling.  It was very close and a strange quiet settled over the city.”

“A Grand Sight, but Awful”

At 4:30, “a dark, murky looking cloud” could be seen “banked high up against the horizon”  in the west.

“People were impressed with the strange appearance of the cloud and with the sky overhead.  Some who had been in regions regularly visited by the dreaded cyclone instinctively felt that all was not right and watched with trepidation the approaching storm.”

At “three minutes to five the huge cloud, which now seemed  to be a turbulent mass of smoke, dust and steam came slowly toward the city . . .” 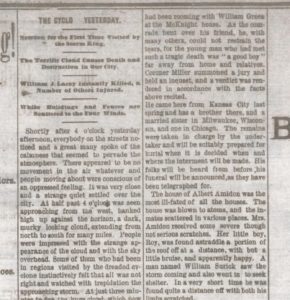 “Almost at the same instant, a cold wave came from the north and then followed a terrific hail storm, with drenching rains.”

After the storm, there were reports that a “cyclone had struck the city at the carriage factory.” People quickly went and discovered the “roof of the north wing of the immense building had been stripped off . . “

“No Hope of Recovery”

In the midst of property damage,  the first two recorded tornado related fatalities in Harvey County were discovered.

“There, under the heavy roofing was found the lifeless form of William J. Lacey, foreman of the trimming department.  A hundred men lent willing hands, lifted the timbers and roofing off of the remains of the unfortunate man.”

Thirty-seven year old Lacey was  well-liked, “regarded as an honest, upright and perfectly trustworthy young man.”  His brother, Frank, arrived a few days later to return the body to Galena, Ill for burial.

The destruction continued southeast of the factory in what was known as “Walt’s Addition.”  Six homes had been destroyed by the fury of the “wind monster.” In the rubble, another tragedy.

“In the ruins of J.P. Amidon’s house . . . a heart-rending scene met the eye. Miss Annis Hobble was found insensible underneath the rubbish, with her teeth set as in death.”

The unconscious Miss Hobble was rushed to Axtell Hospital where there was “no hope for recovery.”  She never regained consciousness. Sixteen year old Annis Hobble died of her injuries on March 8, 1888.

Unlike today, when forecasters can give  reasonable warnings, the 1888 storm  caught everyone off guard and demonstrated “the utter inability of man to predict such.”  Indeed, the forecast by the weather bureau for March 1, 1888 called for the “probability of light snow followed by colder weather.”

The newspaper reports also suggest that this was the first tornado to strike the city of Newton. The headline for the March 2, 1888 edition of the Newton Daily Republican read;

“Newton for the First Time Visited by the Storm King.”

The Kansan also noted that the tornado on March 1 was “Newton’s first Experience with the Storm King.”

A storm in early  March was also a surprise. The reporter concluded;

“The appearance of a cyclone storm in Kansas in March is, we believe, without a parallel.”