“A Revelation to Our Citizens:” Newton’s ‘Colored’ Band

A program, “The Latest in Home Entertainment: Enjoying Music in Harvey County,”  will be given on Sunday, September 20, 2015 at 2:00 at the Harvey County Historical Museum & Archives.  Join us to learn not only more about the way in which “how” we listen to music has changed, but some of the early musical leaders in Harvey County.  This post highlights one person who enriched lives with his passion for music.

A small  announcement in the August 11, 1909 issue of the Evening Kansan-Republican, indicated the start of a new venture in Harvey County.

The “Colored Band”**  was formed March 3, 1909 with a local man, Lloyd Rickman, serving as director.  For some band members this was a brand new undertaking.  Several could not even read music.  They “applied themselves diligently to practice”  and their first concert at the Newton depot in August was a success.  After the performance, the band left on the train for Peabody, Ks, where they played for the Peabody picnic. The editor of the newspaper noted that it “was a revelation to most of our citizens who heard it.  Many have not known before that this organization existed.”

The Band was also one of three bands that marched in the Booster Parade November 2, 1909. 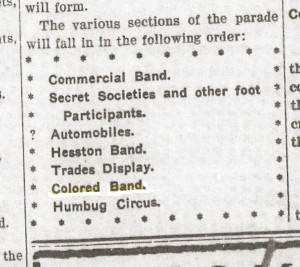 Lining Up for the Parade 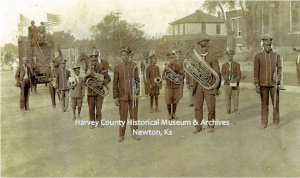 The 1922 50th Anniversary ed of the Newton Kansan noted that the band was a “self-supported organization and pays its expenses out of what can be raised through concerts and entertainments.” With the money raised, they purchased instruments and uniforms.

The editor further noted that Rickman’s band was one of the “best colored bands in the state” and the fifteen member band hoped that they “may inspire the people to become better citizens.” The editor concluded that they “work hard to give Newton an admirable colored band.” 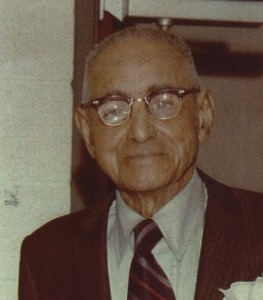 Lloyd Rickman was the driving force behind the band.  Born September 19, 1887 to  Patrick Rickman and Amanda Burdine Rickman, he married Hazel and they had three children; Lloyd, Kenneth and Ruthabel. 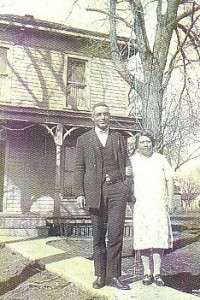 After the death of Hazel in 1949, Lloyd remarried Josephine Gross Rickman.   He was a member of the Hall’s Chapel A.M.E. Church in Newton.

At different times, he worked as a janitor  in the city building and auditorium.  He also worked as assistant station master for the Santa Fe Railroad.  Lloyd Rickman died March 6, 1985 at the age of 97.

Links to other posts on Harvey County Musicians, and posts related to the Rickman/Anderson family, and Joe Rickman.