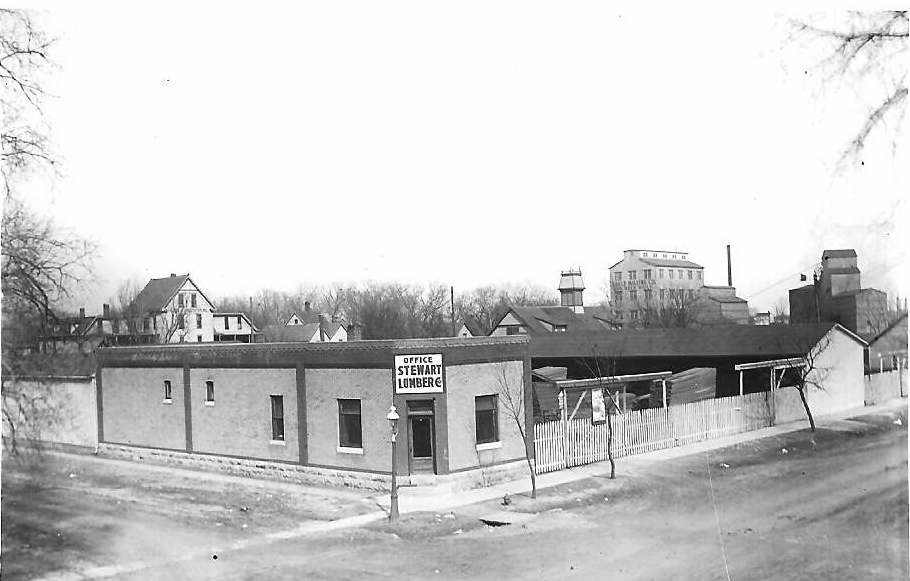 Eagle/Empire/Consolidated Mill in Newton – 1909 photo. Chartered: 1899. Named Eagle Milling Co., this flour mill went into business on East Sixth in Newton. A year later, a new warehouse was added. Ownership remodeled the old Watson elevator located between Broadway and East Sixth streets and near to the railway tracks. In 1904, Eagle Milling erected a new facility on property at the corner of Broadway and Pine streets with the old mill on East Sixth being vacated. In 1913, the mill at Broadway and Pine street was auctioned due to bankruptcy. After J.H. Johantgen purchased it, the mill was re-named Empire Milling Co. Following a sale in 1918, the name became Consolidated Flour Mills Company. It was in business until 1959 when it was destroyed by fire. Note: Looking northeast from (1) Stewart Lumber Co. at 200 E. Sixth St., the notable landmarks are (2) Axtell Hospital at 207 E. Broadway, (3) Eagle Milling Co. at 301 E. Broadway and (4) Newton Elevator at East Sixth and Pine streets. Photo Source: HCHM Collection.