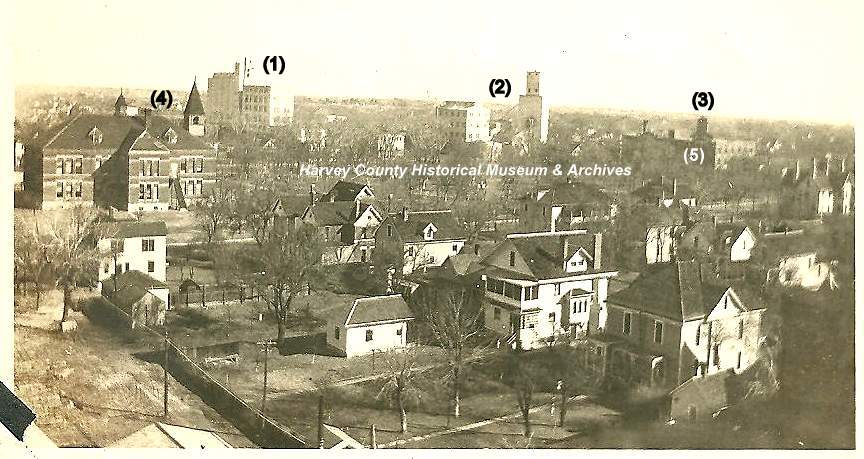 “Cannot Induce Farmers…Across Tracks”; Newton Elevator Was Built – ca. 1920 photo. Constructed: 1898. Even though the Newton Milling & Elevator Co. had a sizeable operation with its primary facility on West Third and an auxiliary mill on East Third, the company felt compelled to expand at East Sixth and Pine streets. Reporting on “the new elevator to be built by the Newton Milling & Elevator Company,” an 1898 edition of the newspaper said, “The building will be located just north of the Santa Fe freight depot.” A second article gave the reason for this construction as a need for “building an elevator on the north side to buy wheat for its mill on the south side, because it cannot induce farmers to bring their wheat across the tracks.” Note: Taken from the tower of the Harvey County Courthouse looking east/southeast, the photo shows landmarks of (1) Goerz Mill and (2) Consolidated Mill on East Broadway plus (3) Newton Elevator on East Sixth Street. Other notable structures are (4) Cooper School on East Seventh Street and (5) Axtell Hospital on East Broadway. Photo Source: HCHM collection.