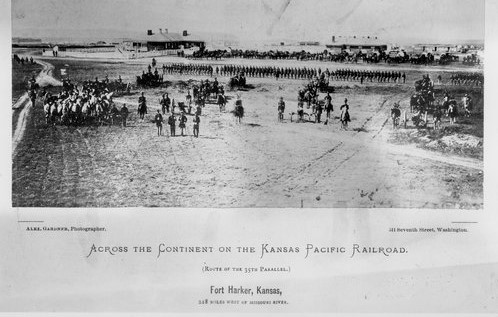 (F) River Route to Cottonwood Falls Trail of 1867. When AT&SF railroad surveyors were staking out a good, reasonable path, they followed an existing wagon trail. It went from Emporia through the future sites of Florence, Peabody, Newton and Hutchinson. From close to Nickerson, it diverted west to the Big Arkansas River and then up to Ft. Zarah (east of today’s Great Bend). By making the southerly bend, wagons (and later, the railroad) were able to bypass the Sand Hills which cover the area from Burrton northward to the Little Arkansas River and then westerly into the area north of Hutchinson. (G) Fort Harker to Wichita (Camp Beecher) Trail of 1868-69. Fort Harker (at today’s Kanopolis) was the furthest west supply post and point of the Union Pacific, East Division. Since no railroad was near Wichita and its small military camp (Beecher), supplies were moved along a wagon trail (previously an Indian trail) from Ft. Harker to Wichita. Fort Harker (originally Fort Ellsworth) was established in 1864 to provide protection for the Kansas Stage Line and military wagon trains transporting goods along the Smoky Hill Trail and the Fort Riley Road. The fort closed in 1872. (H) Fort Zarah to El Dorado Trail of 1871-72. Travelers used this trail as a shortcut to board the train at Newton so they could get back east faster. If they were coming from the Fort Zarah area, travelers diverted from the Santa Fe Trail just southeast of the present-day city of McPherson and angled to Newton. Note: Fort Zarah was established in 1864 as one of a chain of forts built on the Santa Fe Trail to protect wagon trains and guard settlers. During the 1871-72 time frame, there was no Fort Zarah generated activity on this trail since the fort was abandoned in 1869. However, the fort’s former site was a known reference point for travelers so its name was incorporated into the Trail’s name. Source – https://www.kansasmemory.org/item/215797