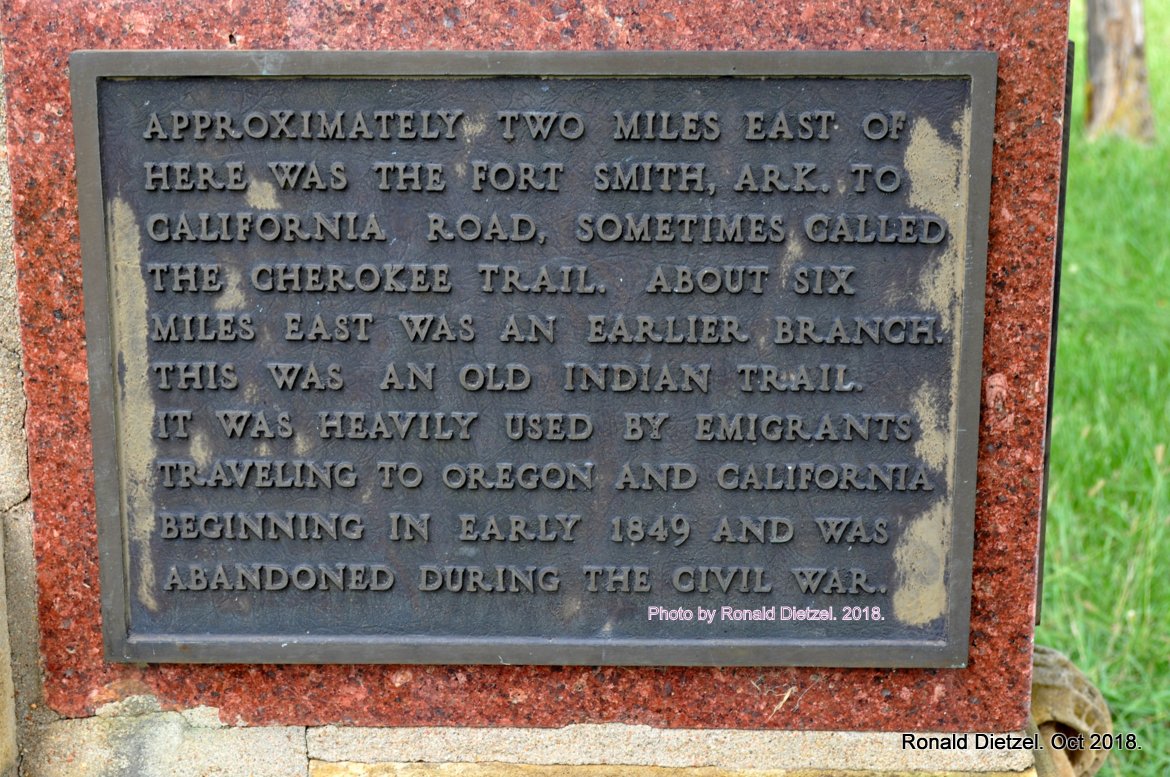 (B) Cherokee Trail of 1849 – A Gold Rush Trail. With its origins in the 1849 California gold rush, the Cherokee Trail passed through Harvey County. It was also called the “Fort Smith, Arkansas to California Road” as well as the “Evans/Cherokee Trail.” It came out of Arkansas, went through Oklahoma and then into Kansas. Passing through south-central Kansas, the Cherokee Trail joined the Santa Fe Trail east of today’s city of McPherson. From there, it traversed Colorado into Wyoming. The Cherokee Trail connected as a feeder trail to the California Trail and to the California gold fields, becoming eventually an emigrant and all-purpose trail. The trail was shut down at the outbreak of the Civil War. Led by Captain Lewis Evans, the first group on the Cherokee Trail had 130 travelers in forty wagons. The majority were Euro-Americans. About fifteen were Cherokees from Talequah, Oklahoma. They joined the travelers from Arkansas at Grand Saline, Oklahoma. The “Old Branch” (B1) is a portion of the 1849 Cherokee Trail. In 1859, a “New Branch” (B2) developed when interest in the trail was renewed by the Pikes Peak Gold Rush (Colorado Gold Rush). Note 1: The Cherokee Trails of 1849 and 1859 should not be confused with the 1830s era “Cherokee Trail of Tears” during which there was a forced relocation of Eastern Woodlands Indians from the Southeast region of the United States. During the 1830s Trail of Tears, an estimated 100,000 indigenous people (Cherokee, Creek, Chickasaw, Choctaw, Seminole and other nations) were displaced to “Indian Territory” west of the Mississippi River. About 15,000 people died during the journey west. Note 2: Hwy K-15 marker in Harvey County. Photo credit: Ronald Dietzel. October 2018.