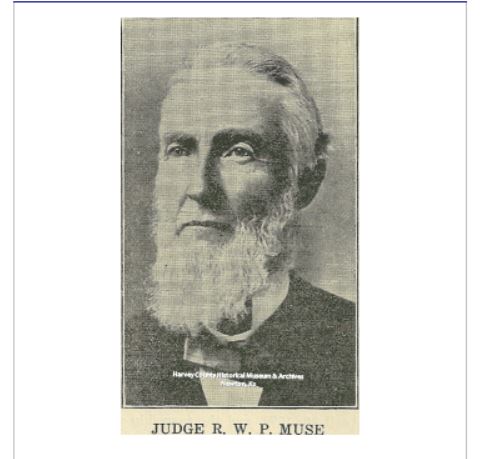 Judge Robert W.P. Muse (1821 – 1896). Probably the one most important person in the development of both Harvey County and Newton was Judge Robert W.P. Muse. He was a businessman, lawyer, editor, politician and promoter of Harvey County and Newton. In his business capacity, Muse (along with Capt R.M. Spivey) took charge of the land department of the AT&SF railroad. They conducted a large business of handling nearly all the AT&SF company lands in Harvey and adjoining counties. Muse assisted in laying out the city of Newton. Muse’s other business interests included a lumber yard, property owner, builder, and banking. In the political arena, he gave leadership to the 1872 formation of Harvey County. Elected in 1881, Muse was Newton’s mayor for two years.