This post was originally posted on Friday, August 3, 2012 on HCHM’s previous blog site.

by Kristine Schmucker, Curator
A week ago, I had the opportunity to attend the Fourth Thursday Story Telling Session at Peace Connections in Newton.  The topic was Guest House Reminiscence. 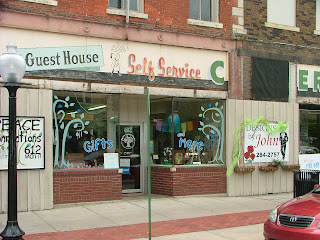 The Guest House was a place of firsts.

For many, the Guest House was their first job.  One lady recalled how she started working at the Guest House at the age of 14 and really disliked wearing the required hairnet. One man, who worked as a manager, recalled how it was a challenge to make sure that hairnets were worn, especially by the teens.

The Guest House was the first restaurant in Newton to integrate in 1957.  Every one, regardless of race, was welcome to come in, sit down, and be served their meal.
Rutschman also introduced Kentucky Fried Chicken to Harvey County residents.  Stories were also told about the transition to the Ramada Coffee House and the decision to close the Guest House in 1972.
Of course, food was discussed.  Many recalled the that certain dishes were served on specific days – fish on  Friday, turkey on Thursday and meatloaf on Wednesday. One person likened the food on the buffet to “a really good church potluck.”
One story really reflected how times and customs have both changed and stayed the same. Coffee breaks have long been popular.  In the earlier days,  Rutschman would take $10 of change and place it in a bowl and set it on the counter.  People would come in for their coffee break and make their own change from the bowl. He was able to do this for a number of years without any problem. Eventually, he had to remove the change bowl and have someone ring up the customer due to missing money. 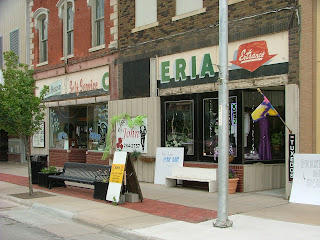 Some traces of the Guest House still remain.  Rutschman pointed out the “Exit” sign that is still visible in Peace Connections.  There is also the exterior sign that was revealed earlier this spring when the awning was removed.

This is only a small portion of what was shared at Peace Connections.  From the stories shared, it was evident that the Guest House was an important part of the Newton community for many years.  Some of the stories will be part of the upcoming exhibit, “The Way We Worked: Serving Harvey County,” which opens September 8.

A big thank you to all that shared, to Myrna Krehbiel, Peace Connections for facilitating, and Roger Rutschman for sharing his memories of his family business.

Mr Rutschman sat all us employees down before we opened one day. He had encouraged a Watress to suggest items to customers as a way of increasing sales. “You could sell Strawberries and Ice Cream for breakfast if you just suggest it.” Later she had a customer who said he just didn’t know what he wanted. She suggested Pancakes with IceCream and strawberries. They sold three that day.