With this post, we conclude the two-part series on the Harvey County YMCA.

When the YMCA opened in the summer of 1902 on W. 6th, the editor of the the Evening Kansan Republican declared “the handsome new Y.M.C.A. building the pride of all Newton.” Roughly six years later, there was a need for a new building.

“The story of the faithfulness of Newton citizens during the closing hours of the great eleven day canvass will be told on the big thermometer.  Each time $500 in subscriptions is turned in at headquarters the Eagle mill whistle will blow.”

To raise the money needed for a new building, 15 teams were organized to solicit subscriptions.

The Evening Kansan Republican noted on Nov. 16, 1908 that YMCA building fund still needed $5,000 to meet the goal. The amounts already committed for each team was published with a total of $20,090.42. More people needed to step up to meet the goal.  The editor observed  that

“few people seem to appreciate the gravity of the Y.M.C.A. building situation. Many similar campaigns . . . have failed at the crucial time, because the good people of the city have procrastinated and felt that even if they did not work or give that amount would be raised anyway.” 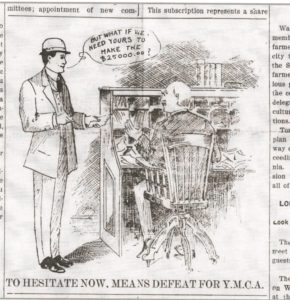 Big Thermometer at the corner of 6th & Main, Newton tracked the progress of the campaign. 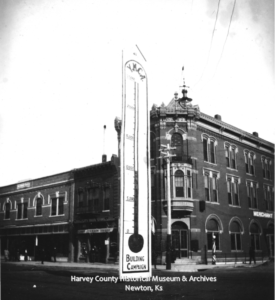 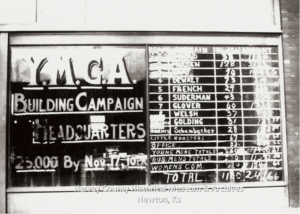 The 1908 campaign for a YMCA building in Newton was ultimately successful.  In eleven days, the community raised  $30,000.

With the funds in place, plans for the building could go forward. Topeka architect, J.C. Holland was hired and Wurster Construction Co, Wichita was chosen as general contractor. 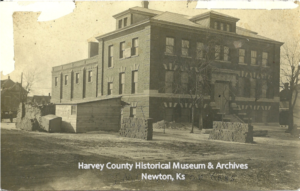 An open house for the community to visit the new YMCA was held early in August 1910.  Visitors were “shown through the structure from basement to garret.”

Two aspects of the building were especially important, the swimming pool and the gymnasium.

“The swimming pool is one of the largest of its kind in Kansas, and certainly one of the most sanitary and best equipped.  Its floor is of Venetian tile, while the sidewalls are of glazed white brick.”

The swimming pool measured 18 by 44 feet and was kept clean with a “skimmer,” which moved the water continually. 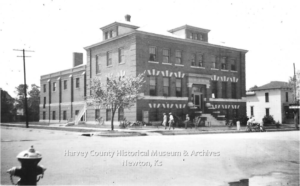 “The gymnasium hall is extra large, well lighted and ventilated, and is equipped with dozens of different kinds of apparatus.”

The gymnasium was 45 by 70 feet and “particularly appropriate for basket ball” with room for roughly one thousand spectators. In addition, there was a tennis court, room to play volleyball and “all kinds of calisthenics.”

The YMCA Board also intended to hold track meets with teams from other cities.  Space for “hurdling, pole vaulting, hammer-throwing and running of all kinds” was included in the new building.

“Place for the Boys”

At the core, the YMCA was to be a “place for the boys” a home away from home. The organization provided opportunities for physical, mental and spiritual growth to the young men.  A 1912 annual report  revealed a strong connection between the organization and the community to meet these needs. A religious committee provided Bible classes that met weekly.  The study was led by Rev Langenwalter from Bethel College,  a man “who has made such a thorough study of the Bible, as to be most capable of teaching this class.”  In addition, business classes were taught by several local men and churches took turns providing the evening meal. 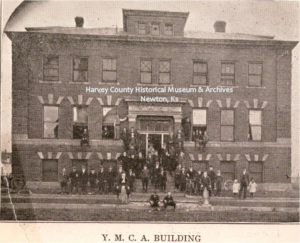 The 1912 report also noted that the gymnasium saw use.  In October – 796, and in November – 831, young men used the gym for gym classes. Swimming and bowling were also quite successful.  Overall for the year, “the number of members that used the building for baths or physical activities” was over 1,500.

The YMCA at west 6th continued to serve Harvey County through the early 1970s. 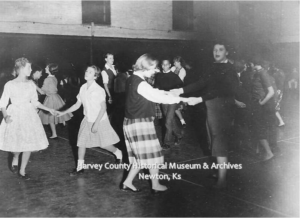 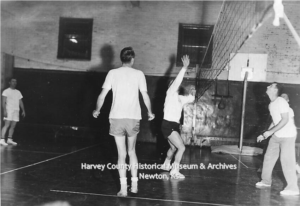 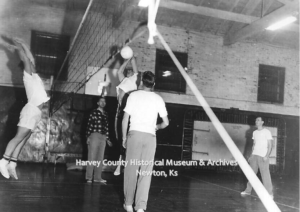 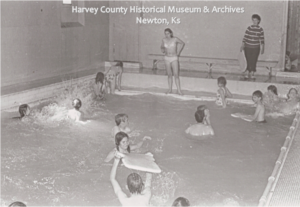 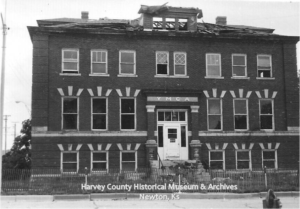 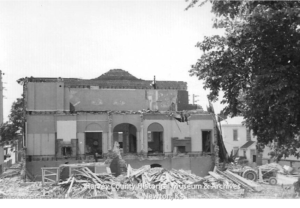 New information added by Linda Koppes, former volunteer photo technician at HCHM.  When she added the demolition photos of the YMCA (see above), she noticed the eyes painted on the upstairs interior wall. Recently, she found out that Eddy Seger painted the upstairs and it was a place for people to go, hang out and listen to music.  The eyes were painted to highlight the  local group of musicians, called “Eye 2 Eye,”  that played in the space – “Newton’s coffee house.” Also, John Torline recalled that he was responsible for administering the contract for demolition.  John Toews, a Holderman Mennonite, was in charge and he salvaged a great deal of the material.