On Sunday, January 17, 2016, at 2:00, the museum will host a first person portrayal of a soldier during the American Revolution, Deborah Samson. Anna Smith, as Samson, will present the story of an enlisted ‘man’ in General George Washington’s Continental Army.  Curious about this woman, I looked up some background. 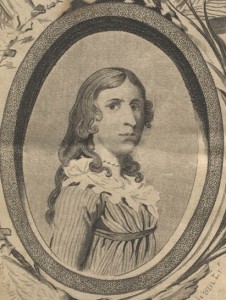 Born in Plympton, Mass., December 17, 1760, Deborah was the oldest of three girls and three boys. Her father, Jonathan, was lost at sea when Deborah was quite young, as a result her childhood was one of poverty. She was sold as an indentured servant at the age of 8 or 10.

At 18, her indenture was completed and the War of Independence was being fought. Deborah was interested serving her country, but women were not allowed in the military. To get around this, at age 21, she adopted the name of her dead brother, Robert, and disguised herself as a man.  She was attached to the 4th Massachusetts Regiment as Robert Shurtleff, saw active combat and was injured on several occasions.  It was not discovered she was a woman until she suffered a fever toward the end of the war.  The doctor who treated her while she was unconscious took her to his home for treatment rather than betray her.

Plan to come to the museum on Sunday for this FREE program and learn more about this fascinating woman.

Thanks to Janelle & Gaylord Sanneman for sponsoring this event so that it can be offered as a free event.