The new Harvey County YMCA is scheduled to open on November 14, 2016.  In an article on March 26, 2016, Shelly Conrady, vice president for marketing and communications at the Greater Wichita YMCA noted that “this will not be the first YMCA in Newton.”  In fact, the organization has a long history in Harvey County.

This post is Part 1 of 2 that explores the early history of the YMCA (Young Men’s Christian Association) in Newton, Kansas beginning in 1902.

“No more  worthy project was ever proposed and it is sincerely hoped that the initial steps which have been taken, will eventually culminate in a Young Men’s Christian Association for Newton.”  (Evening Kansan Republican, 22 Jan. 1902, p. 1.)

The purpose of the YMCA was the “improvement of the spiritual, mental, social and physical condition of young men.”  The YMCA movement was part of a larger “Era of Reform” in the late 19th century with a focus on providing activities and instruction for working class men.

The movement  started in London in 1844, when the first  YMCA was established. In Kansas, the first YMCA was formed in Topeka in 1879. The initial steps to form a YMCA in Newton were taken in January 1902, and the editor of the Evening Kansan Republican noted that  there was “no more worthy project.”

He credited “revival meetings, . . . in progress for the past three weeks,”  with  creating interest and support in the project.  He also noted that

“it is very probable that should the citizens of the city show a disposition to raise three or four thousand . . . the Santa Fe will take hold of the matter and will double the amount raised. “

By March 1902, four men indicated they would oversee the project of a YMCA.  These “public spirited” men were D.S. Welsh, G.H. Welsh, W.J. Trousdale, and Don Kinney.  The location would be at the  Welsh Livery on west 6th, Newton.

According to the plan, the Welsh Livery Barn would be “remodeled and converted into a modern building” with about 20 rooms. *** 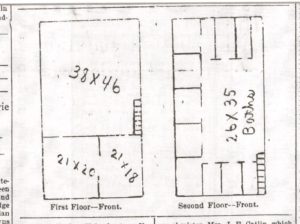 The Tuesday, April 1, 1902 edition of the Evening Kansan Republican reported that the YMCA had been officially organized. An organizational meeting was held March 31 with nearly 150 men present.  Those present “showed unmistakable evidence of earnestness and determination.” Officers were elected and the constitution and by-laws were adopted. Work on remodeling the Welsh Livery Barn started  the next day.  D.S. Welsh was a primary force behind the project, “pushing the work with the tireless energy characteristic of him.”

Several women’s clubs, like the W.C.T.U., made significant contributions of time and skill. Through their efforts, funds were raised with chicken-pie dinners sold on the Fourth of July and other activities. Various groups also volunteered by

“busily plying the needle and turning out with wonderful rapidity, sheets pillow-cases, spreads, towels, and other articles which will be used in furnishing the bed-rooms of the new institution.”

The building was complete by mid-July 1902.  The YMCA  featured sixteen “large and well-lighted and ventilated” sleeping-rooms, a lecture room, reading room, game room with a bowling alley, and a gymnasium.  The bedrooms included “pictures, books, sofa pillows and numerous things that make a person’s room homelike and inviting.”

An open house for the YMCA building was held the evening of Nov. 5 and roughly 1500 people came to see the “handsome new Y.M.C.A. building, the pride of all Newton.”

“afforded the first opportunity to inspect . . . the unusually fine equipment in the gymnasium, reading room, parlors, and bed-rooms.”

The gymnasium was “one of the centers of attraction.” An orchestra was brought in and “members of the gymnasium class contributed to the enjoyment of the evening with an exhibition drill.”

For the women of the community, this was their only opportunity to visit the facility.  Several ladies expressed “regret that they too could not enjoy the privileges of the institution” even as they admired the “neatness of the rooms and the beauty of the interior.”

Establishing a  YMCA in Harvey County was a community commitment with various groups working together for the greater good.  The editor of the Evening Kansan Republican noted that

“one of the most gratifying features of the work of establishing . . . a strong Y.M.C.A. has been the hearty sympathy manifested by the public generally, irrespective of religious belief, in the cause.  A sincere desire to do everything possible to make the work of the organization efficient has been exhibited on all sides.”

“the completion of this useful public building marks another era in the story of Newton’s progress along moral, intellectual and physical lines.”

***Note:  At the same time as the decision to establish a YMCA was made, the City of Newton received confirmation that they would receive funds from Andrew Carnegie for a library building.

Next week’s post will continue the story of the YMCA in Harvey County.