Never Thought to See Such a Flood: 112 Years Ago 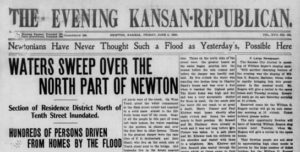 There had been “excessive rainfall” throughout the spring of 1904. Sand Creek and its tributaries were full to there banks and an early morning shower on  June 2 only added to the already saturated soil.  Later, in the afternoon, the Harvey County experienced a “deluge” and the “water fell in torrents, the streets were rivers of swiftly moving water.” Soon, Sand Creek was out of its banks, overflowing first at Main street in Newton. By late afternoon “the water began rushing in a huge stream through  and under the Missouri Pacific bridge across Sand Creek east of Main Street and north of Twelfth, then swept diagonally across Thirteenth, Eleventh, Tenth and Ninth Streets.” 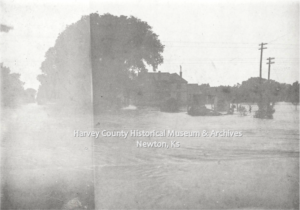 The area north of east 10th and west 9th became a “great lake.” The worst of the flooding occurred between four o’clock in the afternoon and nine o’clock in the evening of June 2.  This was Newton’s first experience with a major flood. The next day the Evening Kansan Republican reported on the rescue efforts and damage caused by the flood.

“Women showed no hesitancy about mounting the horses astride.  they were too glad to get out, wet and bedraggled, but alive.”

A crowd gathered at 10th and Main to assist those coming to safety.

“As a wagon would come out of the flood with a load of men, women and children, wet bedraggled and not infrequently crouching . . . in fear. Willing hands would assist them to the ground and lead them to nearby homes where they could be supplied with dry clothing and given temporary care and assistance.”

Sheriff C. D. Masters “did valiant service carrying many people out of danger on his back.” Henry and Leo Steinkirchner “won the admiration of the crowd” by using their horses to carry people to safety. Livery owners, H.M. Judkins and D.S. Welsh, brought wagons and hacks to help with the rescue efforts.

In one story related by the Evening Kansan Republican, a rescue boat capsized when a small child panicked. Through the efforts of several men, everyone was pulled from the cold flood waters, including the child.  Throughout the rescue, the child’s mother was watching from an upstairs window unable to help.  The men involved in the rescue efforts battled not only the swift, cold current, but unseen dangers of barbed wire and other debris.  One rescuer, Harry Howe was “almost overcome and he admitted that he was not conscious of his actions or his words at the time.” 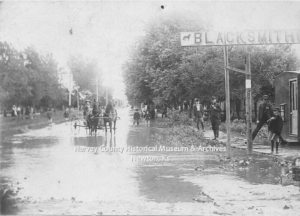 Although there was a loss of property, no lives were lost in this devastating flood of 1904.

According to several “old settlers” there had been two other floods that may have been comparable to the June 2, 1904 flood.  In 1877, the 9th street bridge was washed away during a flood, but little other damage. A rainy period, shortly after Newton was established in 1871, resulted in flooding.  The old settlers recalled that at that time “the flats were not used for homes and there was not danger to life but the creek on North Main street was a mile wide” during that flood.