In the spring of 1914, Carrie Newell who had been living with an aunt, Mrs. E. K. Pierce in Azusa, California, rented rooms closer to her work. She also talked about moving to Los Angeles. Her disappearance was not noticed for several days.  On March 5, 1914,  43 year old Carrie Newell “dropped from sight” after applying for a job as a domestic at the Andrew Boddy Ranch home near San Dimas canyon. 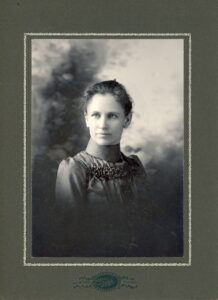 Once her disappearance was noticed, Mr. & Mrs. Pierce “spared no effort to try to find her, the only traces they found were at near by places near the mountains.” When they asked people around the area, they were told that Carrie had “stopped and asked for work and the people had noticed peculiarities in look and actions that made them suspect dementia.” They offered her money, but she “exhibited considerable money and said all she wanted was  employment.”

No trace of the Newton grade school teacher could be found after that interaction.

Miss Newell was a well respected 1st and 2nd grade teacher in Newton in the late 1890s.  Her father, Rev. L.M. Newell was the pastor at the First Baptist Church in Newton, Ks.  In April 1898, he passed away. His first wife, Maria Pierce Newell died in 1878 in Villisca, Iowa. A second wife, Sarah Singer Newell died in 1889. One can imagine that in addition to teaching school, Carrie help care for her father.

After teaching in Newton, Miss Newell went to teach in Colorado. Her health declined and she went to live with her aunt, Mrs. E. J. Pierce in Azusa, CA.  Mrs. Pierce  noted that her niece was “subject to spells of nervousness, but she never appeared mentally unbalanced.”

“Can Anyone Locate Miss Carrie Newell?” 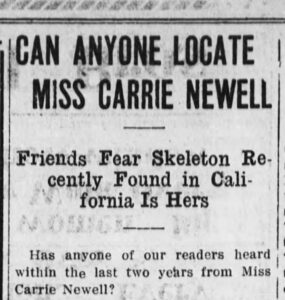 In January 1916, two men hiking through the area made the discovery of the skeleton, “while picking their way through a thicket.”  The men discovered a skeleton “clad in a gray suit and red sweater, which were the garments worn by Miss Newell when she disappeared.”

Another reporter add these details,

Mrs. E. J. Pierce was called and on January 6, 1916,  she “identified the skeleton of a woman, which was found in Live Oak Canyon by  Will and Earl Rummel, . . . as that of her long-lost niece, Miss Carrie Newell, who disappeared from Azusa 23  months ago.”

The Fate of Carrie Newell 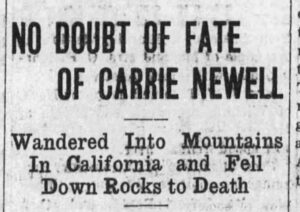 Mrs. Pierce and her son, viewed the head and “the identify was established by an  examination of gold-filled teeth. Further proof was furnished by a check on a Glendora bank, which had been given to Miss Newell by a girl friend  . . . found in the grass near the body.”

The body was found five miles away from  the Ranch where she  was last seen.

“It appeared that she had gone up the canyon instead of down the road and had fallen from sheer exhaustion down 100 feet of rock to her death. Her watch, breast pin and stick pin were found nearby.”

One theory for Miss Newell’s death is that she became dehydrated, which led to confusion and she became lost.  In her exhaustion, she fell from the cliff and died.  The descriptions of her behavior by the last people to see her seemed to support that theory.

Miss Carrie Newell was 43  and was buried at Azusa, CA.

This post was inspired by a Facebook question in the a Kansas history group, Kansas History Geeks, in February 2022. Andrea Usher posted the photo and asked for more info. Many people quickly helped find clues. Since Miss Carrie Newell spent time in Newton, Ks, I thought it was appropriate to gather the information, do some more research and share her story.  Thanks to all the people that provided clues. I’m sorry I did not get all of your names, but I hope you will enjoy this post too.