Newton has had several major fires throughout it’s history. The largest occurred on August 4, 1914  and disseminated the buildings on the east side of Main in the 500 block. The fire that destroyed the opera house followed a few months later on January 1, 1915. 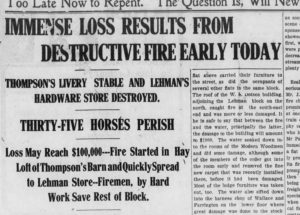 When firefighters arrived at the scene, it was apparent that the Livery was beyond saving, so they focused on keeping the fire from spreading to nearby businesses, including Lehman Hardware. Assistance was given by the Santa Fe Firemen and at one point “eight streams of water were in operation on the fire buildings and exposures.” Despite their efforts, the building was soon totally involved. 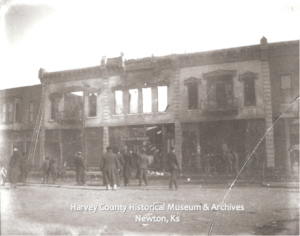 Thompson’s Livery Stable, including 35 horses, a small barn and Lehman’s Hardware were completely destroyed or gutted. Other adjacent buildings sustained some damage. 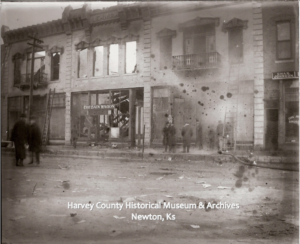 The loss of the livery was one that Thompson could not recover from.  A well thought of auctioneer and businessman, he was already in poor health, suffering from Bright’s disease.  Thompson sold the lot to Samuel Lehman on 20 February 1908.  For the last year of his life he was totally blind and remained at home until his death at the age of 54 on 26 February 1909.