While finishing up Christmas shopping last week, I happened to look down as I left one of the stores along Newton’s Main Street. 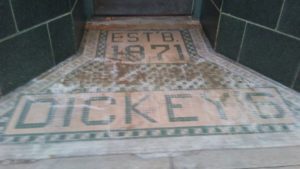 Repairs were underway and the top layer in the entry way had been removed and a piece of history was revealed. 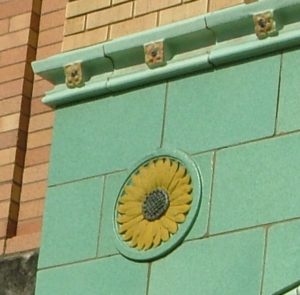 Today, the building is home to the Main Street Company, a clothing store. Originally, this building, with the fun architectural details, was Dickey’s Drug & Jewelry. 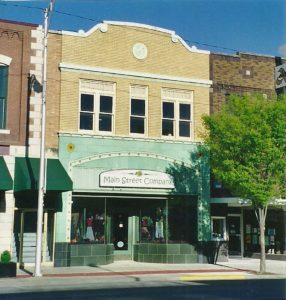 John B. Dickey was born in Michigan in 1848.  John, “having a liking for the drug business, learned his profession in Centerville, Mich” where his father was a practicing physician.  At the age of 22, Dickey headed to Kansas and settled first in Wichita where he worked as an “assistant postmaster.”  He began to hear about a proposed town north of Wichita and the adventures of a cattle drive.  He resigned his job to herd cattle. While working as a cowboy, he contracted malaria. He went to the new drug store in Newton owned by W.P. Pugh for quinine. He argued with Pugh over the high price of the drug.  The argument ended with Dickey buying the business paying a monthly  rent of $65  to Pugh for the small wood frame building.   In June 1871, he opened “Dickey’s Drug” in Newton.  A year later,  building was destroyed by fire, but Dickey’s Drug continued. 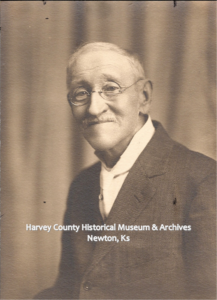 In 1879, he purchased a lot at 611 Main, Newton and built a new structure and for the next 50 years Dickey’s Drug was a Newton fixture. 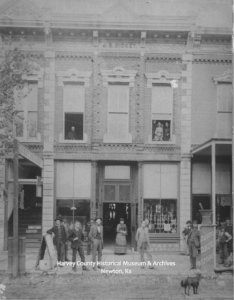 By the turn of the century, he had added jewelry to his stock. 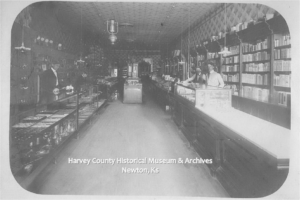 In addition to running his business, he served on the Newton City Council and as Mayor.  Many civic projects, including Newton’s Country Club and two public parks, Military and Themian Parks,  succeeded because of his “unfailing optimism.” 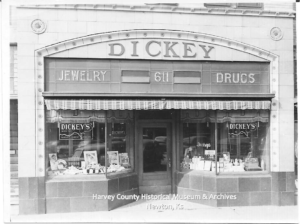 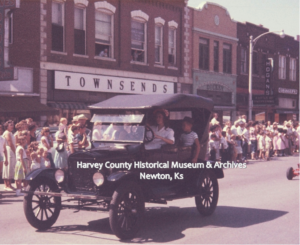 Dickey’s visible in the background, 1950s. 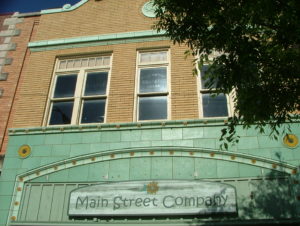