Our new exhibit, Memories in Miniature, is opening this weekend, February 17, 2018. One featured miniature is the model railway created by Dale Stewart.  Stewart began began working on the HO scale model in 1946 and created a fictional line that operated between Florence and Piedmont in Kansas. The collection was donated to HCHM after Stewart’s death in 2016.  A portion of the train model was installed for the exhibit by Gaylord Sanneman.

Dale Stewart was a 1950  graduate of Newton High. As a student he entered his pen and ink drawings focusing on the railroad in local competitions. He continued to create detailed drawings of trains throughout his life.  Stewart was in the U.S. Army during the Korean War as a non-commissioned officer. His career was as a newspaper editor, first for the El Dorado Times in Kansas and later the Idaho Statesman, Bois.  Beginning in 1970, he worked as the city editor for the Times-News in Twin Falls. His newspaper career spanned various transitions in the field of journalism including the hot metal, cold type  and the computerization of publishing.

His lifelong interest in all things railroad, and especially Santa Fe Railway in Kansas. was reflected in his art and model railroad.

Dale Stewart completed this pen and ink drawing in April 2008. He dedicated it to his friend and mentor who had recently passed away, Lloyd E. Stagner.

“The drawing was inspired by a recollection of the late Lloyd E. Stagner of Newton, rail historian of the first order and retired Santa Fe employee.” 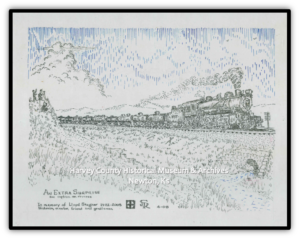 Dale Stewart writes on the back of the drawing:

“Having crossed Bridge 147A a short distance back, Extra 897 West starts up the stiffer grade leading to the divide between the drainage of the South Fork of the Cottonwood River and the Walnut River.  Engine 897 is fresh from a visit to the shop at Emporia.  Trailing it are 50-Odd empty petroleum tank cars en route to the refineries at Augusta and El Dorado, where 897 is assigned switching duties.  The 2-8-2 is one of Santa Fe’s first 15 of its type, leaving the Baldwin Works in 1903.  By mid-20th century, the 885 class is in its sunset years but still doing solid service. The rail fans and photographers on the rim of the out were no doubt surprised by the appearance of the older locomotive on the Santa Fe’s main freight line.  Bridge 147A carries the track over Kansas Highway 13, a scenic route through the Flint Hills pasture region.”

The Archives at HCHM houses the collections of both men, Lloyd E. Stagner and Dale Stewart.  An exhibit of Stewart’s art and his miniature train is on display February 2018 – December 2019.