Henry Brunner Was Among Them

Sometimes a name just keeps popping up in research.  Maybe never exactly part of the action, but an observer or commentator.  Henry Brunner seems to have been such a man.

In his later years,  Brunner periodically wrote letters to the Evening Kansas Republican describing the early years of Newton or correcting the  possible mistakes of others.

“I have read in your paper, which I have been taking since the Kansan’s first issue, about the very few now remaining of the 1871 residents in Newton. . . . I know from my diary that May 19, 1871 there arrived on the townsite of Newton Captain Dave Payne, who boarded with me at the Santa Fe House during the winter of 1871-72.” 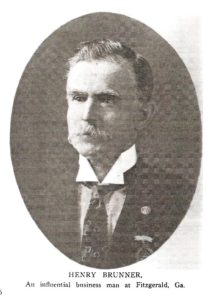 Heinrich ‘Henry’ Brunner was born in Germany 27 January 1842.  He immigrated to the U.S. in approximately 1855 with his parents.   Brunner enlisted on 24 April 1861 and served with the Union Army, Company M, 1st West Virginia Cavalry during the Civil War. He mustered out 5 November  1861. During this time, he married Mary U. Leppart and settled in Cincinnati, Ohio.

In 1871, Brunner arrived in Harvey County, initially settling on a homestead on Section 24, Emma Township.  He left his family behind until he could earn sufficient funds to bring them to Kansas.  His family had joined him by July 1872 when his son, Henry L. Brunner was born in Newton.  He was reportedly the “first baby boy born on the town site.” In 1875, Brunner opened a small grocery, called the “Blue Front,” and the venture met with “greater success . . . than he had anticipated.” Ill health forced him to retire from the business in 1881.  At some point in the 1880s, he built a popular skating rink on “West Sixth street opposite the Presbyterian church” which was torn down in 1895.

By 1888, Brunner was again in business, this time opening a  hardware store at 708 Main, Newton, Ks. The December 31, 1887 issue of the Evening Kansan noted that

“Here is another instance of fortune’s favor.  Mr. Brunner came here as poor as Job’s turkey, without friends, and without any earthly assistance except his own hands and his strong will power.  He labored earnestly and zealously . . . Mr’ B’s Newton possessions to-day are alone worth thousands of dollars . . . He is an honest, reliable and trustworthy business man, in whom the confidence of the public is placed.”

Poor health continued to plague Brunner. In 1895, at the age of 53, he moved to Fitzgerald, Georgia.   Fitzgerald, Georgia was sometimes referred to as “the Colony,” and it was the dream of Philander H. Fitzgerald. He wanted to create a colony for Union veterans and families in the South where they could “spend remaining days in a milder climate.”  Brunner apparently thrived in the Colony where he was “an influential businessman” running a successful restaurant.

In March 1903, Mary U. Brunner filed for divorce in Harvey County.  She died in 1910 and was buried in Greenwood Cemetery, Harvey County. The couple had four sons. At some point, Brunner married for a second time.  Her name was Harriet Alice Cole Goodman Brunner.

It was during his time in Fitzgerald that he frequently sent letters to the Newton paper commenting on events that he remembered. On 11 August 1909 he offered correction on the location of two wells.

“Dear Sir:  While reading from this distance in the Weekly Kansan-Republican of the two public wells now obscure on Main street . . . found several errors, but was watching for the errors to be corrected . . . seeing none I deem it but a privileged to step up and speak out, since I was at that time a part of the early pioneers and on the spot to observe.

The first well dug at the intersection of Sixth and Main.  It was dug by Joe Rynearson and Henry Andrews.  Everybody knew Laughing Joe and Silent Andrews.  But the first water on the old town site was a weak spring in the northeast corner of Military park . . .it was tiled off and covered up later. . . The well on Fifth and Main was finally started and dug by ‘Oklahoma Payne.'”   Evening Kansan Republican, 17 September 1909, p. 3. 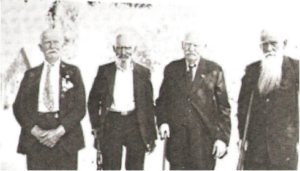 Brunner was compelled to set the record straight again in 1915.

“Henry Brunner writes the Kansan from Fitzgerald, Ga., that he is entitled to be in the list of old settlers published by the Kansan.  . .. [he] can tell much of the early day history of Newton.  He stated that Capt Payne used to board with him when he ran the ‘Santa Fe House’ He saw the first marshal of Newton killed by a man by the name of Bailey . . .” 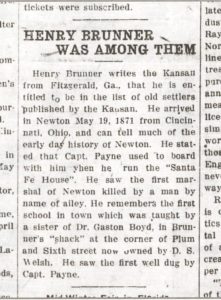 He shared  reminiscences about the first school. 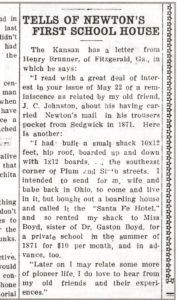 Brunner was the last surviving Union veteran in the Fitzgerald Colony when he died at the age of 98 October 30, 1940. 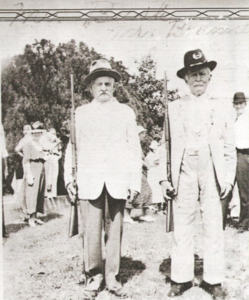 His obituary in the Evening Kansan Republican  noted that Brunner reportedly purchased the very first copy of the first Kansan printed in August 1872. He also had the “distinction of being a life subscriber to the weekly newspaper published by the Kansan Printing company.”

Thanks to Billi Jo Wilson, former  Historic Preservation Planner, Newton/North Newton Preservation, for sharing the tidbits that she ran across related to Brunner in her research.