“The Coffee that Won the West”

On the trail, coffee was made by throwing a fistful of coffee beans into boiling water over a campfire. Tradition said if the cook threw a horseshoe into the pot and it sank, the coffee was not ready to drink. 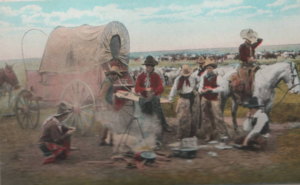 Until the close of the Civil War, coffee was sold green. Beans had to be roasted on a wood stove or in a skillet over a campfire before it could be ground and brewed. One burned bean ruined the entire batch.

In 1865, John Arbuckle and his brother Charles, discovered a new way to process coffee beans. By roasting and coating the coffee beans with an egg and sugar glaze, they were able to to seal in the flavor and aroma. Shipped all over the country in sturdy wooden crates, one hundred packages to a crate, Arbuckles’ Ariosa Coffee was a big success with chuck wagon cooks on cattle drives.

“Who Wants the Candy?”

In addition to coffee beans, each package of Arbuckles’ contained a stick of peppermint candy. This was considered a treat for the cowboy who got the tedious job of  grinding the coffee beans. Upon hearing the cook’s call, “Who wants the candy?” some of the toughest cowboys on the trail were known to vie for the opportunity of manning the coffee grinder in exchange for satisfying a sweet tooth.

After grinding the beans, a pot was filled two thirds full with cold water. Over an open fire the water was brought to a roiling boil. Then, a pound of Arbuckles was added. The pot was allowed to slow boil for several minutes before serving.

Today, Arbuckles Ariosa Coffee, including the peppermint treat, is still available  at Arbucklecoffee.com.