The holidays for 2020 will be completely different than any we have experienced. I wondered what a look back 100 years ago to 1920 might reveal. The world had just been through the Great War, which devastated Europe, and the Influenza, which left its mark on the US. 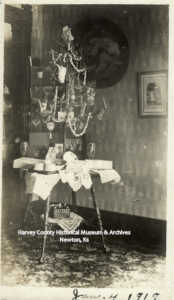 Many of the tradition we enjoy today were also important 100 years ago. The December 24 issue of the Evening Kansan Republican devoted a full page to churches celebration.  Even with a page devoted to the events of Christmas week, the Kansan noted “it has been impossible for the Kansan to handle the mention” of all events.  They reported on an “unusually meritorious effort put forth . . . to commemorate the birth of the Christ . . . at the Congregational church” the previous week. The cantata, “The Tree of Life, pronounced by many as the best Christmas program . . . ever given in that church.” The production featured “exceptionally beautiful and unique” decorations with “miniature stable showing the sheep, camels, horses and goats, with their attendants.” The scene included the central figures of Jesus, Mary and Joseph, the three wise men along with villagers.  Almost 100 children and young people had parts in the program.  The offering taken was to go to “special charitable uses.”  Following the program a “genuine Santa Claus” gave out boxes of candy and nuts.

For their Christmas Eve program, the Christian Church noted, “come early if you want a seat” for the Choir and Orchestra in Sacred Concert performance of the “Shepherds of Bethlehem” on Saturday and the cantata, “The Prince of Peace” under the direction of L. Dean Sands, on Sunday evening.

Some other plans included: The Hallelujah Chorus (Handel’s Organ and Piano) at the Methodist Church; a Candle Light Service at the Presbyterian Church on Christmas Eve “promptly at 7:00 o’clock;” and a midnight celebration of the Holy Communion on Christmas Eve beginning at 11:45 pm at St. Matthew’s. 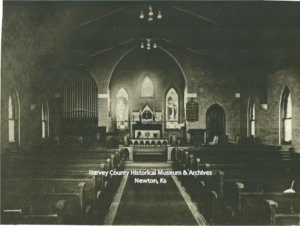 Another annual event was celebrating Christmas “in the little Mexican settlement on West First.”  The event was organized by the “Americanization” committees of the D.A.R. and St Mary’s Catholic Church. All the mothers and children were invited to an evening planned by the two groups of women.  The event included a traditional Christmas tree with gifts and treats given to each mother and child by Santa Claus. Christmas songs were sung and “Christmas cheer expressed in many ways.”

These two groups worked throughout the year with the Mexican women giving “instruction in sewing, sanitation and the English language and the progress that has been made is nothing less than amazing.” 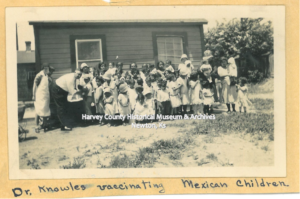 This Christmas party was a way of celebrating the work of the past year.

Despite all of the wonderful traditional events and projects, J. L. Napier,  editor of the Evening Kansan Republican reminded his readers of the reality of a world still in need.  In the editorial on December 25, 1920 he made a “call for relief to the suffering people of European countries” and quoted Charles Sessions, “Christmas extravagance this year will be measured in human lives – not dollars.” He noted that “millions upon millions of people, principally children, are dying of starvation”  and challenged that these people “have the first claim upon our surplus cash.  They must come ahead of the petted child.”

Napier urged people to give “useful presents” not gifts “just to satisfy your own children’s whims.” Rather that money could save the lives of starving children in Europe.

He bluntly noted that if you “gorge yourself with a big expensive family dinner on Christmas and are in misery the rest of the day. . . If the dinner cost you $5 more than a satisfying meal should, don’t count the loss in dollars; count it in human lives.  You have simply let five children die.  That’s all there is to it.” He continued on with other traditions he considered excessive, including the afternoon auto ride.

Napier concluded his editorial with these words that can still offer a challenge to us in 2020; “What a mockery Christmas would be if one-half the world glutted itself and reveled in luxury that day and let the other half die of starvation. . . Won’t you help save these lives; not squander them.”

It is not so different 100 years later. The close of 2020 reveals an opportunity to celebrate, but maybe differently than we are used to. There is also the reminder there are people in great need.