On A Quest: Why We Do What We Do

Late, on a quiet Friday afternoon, a group of four people made the trek up the museum steps.

“We are on a quest, but we are not sure what questions to ask.”

After some questions, it was discovered that they were searching for their grandmother’s cafe. Their parents had moved out of  state, but the two sisters had a vague memory of visiting Newton, maybe once, as children. Their grandmother’s name was Carrie Van Aken and they remembered the cafe as being across from the depot. Could we help them discover the exact address of the cafe?

It turned out we could help them and more.

Born in Michigan in 1867, Carrie Douglas Van Aken would grow up to be a “pioneer resident” in Harvey County, Kansas and an active businesswoman.

Shortly after Carrie and Edward van Aken were married in November 1884 in Michigan, they moved to Nickerson, Kansas where Edward was employed by the Atchison, Topeka, and Santa Fe Railroad as a telephone operator.  Both of their children, Mildred and Lawrence, were born in Kansas.

In 1896, the AT&SF Railroad division headquarters moved back to Newton. As a result, Edward moved his family to Newton.  For the next 43 years, until his death in 1931, Edward worked as a telephone operator for the Santa Fe Railroad.    The family established a home at 120 East 1st after 1910.

Carrie soon became involved in the thriving restaurant/ hotel business in Newton. In 1905 Mrs. Carrie Van Aken is listed as bookkeeper at the Murphy Hotel and Cafe located at 411-415 Main, Newton.  Joseph W. Murphy was the proprietor.  Her daughter, Mildred, also worked for the Murphy Hotel as a clerk in 1902. Eventually, Carrie established her own restaurant business.  The 1917 Newton City Directory, lists Carrie Van Aken as the proprietor of the Auditorium Cafe located at 122 E. 5th, right across from the Santa Fe Depot.   During this time, she also served as secretary on the Chamber of Commerce.

Over the years the cafe at 122 E. 5th was known by several names – the Auditorium Cafe, the Santa Fe Cafe, or simply Mrs. Van’s Cafe. No doubt, she provided a meal to many travelers and railroad workers over the years. 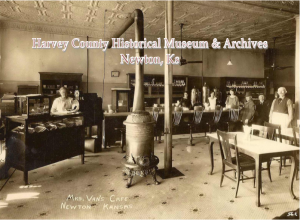 In the photo below, the cafe was located in the three story building adjacent to Marshall’s Furniture Store (originally Duff’s Furniture and Undertaking).  The building was torn down shortly after this photo was taken to make space for a parking lot. 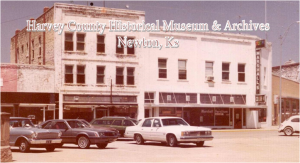 Carrie Van Aken’s obituary, on the front page of the   Newton Kansan (2 February 1954), called her a “pioneer resident.”  She was not only a pioneer in the sense of an early resident of Harvey County, but also as a Newton businesswoman.  Her employment with the Murphy Hotel & Cafe, followed by running her own cafe for many years, allowed her to be a leader in the business community.

At the museum, we were able to connect her story with her two granddaughters over 60 years later through photos and documents.

This connection is why we do, what we do.