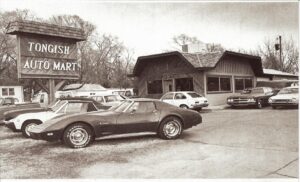 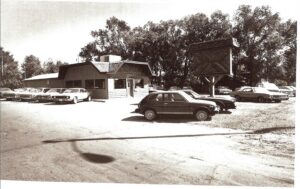 Originally the Buzz-Inn run by Dale and Edna Hosford. They served fast food burgers, fries and ice cream.  Cuckoos were the theme of the restaurant with a huge cuckoo clock marking the time. A huge cuckoo was also part of the front façade and second level roof. The front façade and top part of the structure  burned and the Hosford’s moved on the run the A&W. Tongish bought the structure, repaired the cinder main floor and opened Tongish Auto Mart by 1979.