Our guest blogger,  HCHM Archivist Jane Jones,  has written two previous posts related to the civic activities of Mrs. Ella (D.S.) Welsh.  In this last post in the series, she explores Welsh’s personal life. A recent ceremony named Pam Stevens, Jennifer Vogts and Marilyn Wilder, Newton Area Women of the Year. Perhaps Ella Welsh could be identified as Harvey County’s  historic woman of the year for her involvement in many civic groups that sought to improve the lives of people in the community. Enjoy this story of a woman who dedicated her life to her family and the community.  Unfortunately, we have not been able to find a photo of her.

Ella Welsh (Mrs. D.S. Welsh) was a community activist in Newton.  She had leadership roles in both the local WCTU (Women’s Christian Temperance Union) and the Harvey County Suffrage Association of 1912, the year Kansas women finally received the right to vote in state elections.  Ella and her husband David were loyal and active members of the First Methodist Church at 7th and Main in Newton.  Through her church affiliation she met with the Woman’s Home Missionary Society, taking a leadership role in that group. Other groups with which she was associated were Women’s Relief Corps (auxiliary to the Civil War Veterans organization, Grand Army of the Republic) and the Themian Club.  She seemed to juggle all of these responsibilities successfully, as well as, being a wife, mother and housewife.

Ella’s parents were Robert McCray, a minister, and Jerusha Maxson, a doctor.  McCray and Maxon met at Alfred University, in the village of Alfred, Allegany County, New York.  The university was founded in 1836 by Seventh Day Baptists as a non-sectarian institution.  The school was co-educational, racially integrated and enrolled its first African-American student and two Native American students in the 1850s. Alfred University is an active institution today.

Jerusha and Robert married in 1822. As a minister, Robert moved to Morrison County, Minnesota where Ella was born in 1854 or 1855. She spent her infancy “…in the missionary cabin on the banks of the Mississippi river—where her father ministered Christ to the Indians.”  The children’s birthplaces show Robert was on the move—one son in New York, one son in Wisconsin, a son and daughter in Minnesota and a daughter in Illinois.   Ella sacrificed her own education for her three brothers. The 1870 census shows a 14 year-old Ella was not enrolled in school.

At Ella’s funeral in 1934, it was recalled she and her little brother gathered bits of the wreckage along the shores of Lake Michigan from the Lady Elgin. Occurring on September 8, 1860, the accident was later labelled “the Titanic of Lake Michigan.”  The collision between the Lady Elgin, a sidewheel steamer and the Augusta, a small schooner occurred in a stormy sea at nighttime.  The sidewheel steamer was headed to Milwaukee from Chicago with 385 men, women and children on board.  At the time of the collision they were nine miles from Winnetka, Illinois.  Ninety-eight people survived the disaster.

Ella married David S. Welsh in Elmyra, New York in 1874.  She was nineteen.  They probably knew each other from the Elmyra Methodist church.  Her father had died in 1869, so was not present at the wedding.

David was born in Montrose, Pennsylvania in 1854.  His family moved to Elmyra when he was 9.  By 11, he had joined the Methodist Episcopal Church.  While in New York, David and Ella had four children, three (Bart, Frank and John) survived.  To improve his business opportunities David decided to move west to Colorado and Wyoming. Disappointed with the business prospects in that area, he then journeyed to Newton along the Santa Fe Trail. Arriving in 1882, David along with partners began a livery business. 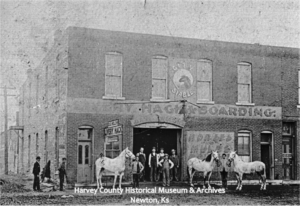 For 36 years David was involved with the business and the religious life of Newton. He belonged to the Commercial Club, was on the City Council for four years, was a Board member of the M.E. Church and was a Sunday school teacher. His most stunning community achievement was building the YMCA on West 6th just west of the Livery and across the street from the Baptist Church. David was described as “quiet and unassuming, he reached out to reclaim the boy or man who had lost confidence in God and his fellow man.”  Ella helped with this project. David was also a staunch supporter of temperance. He was one of the founders of the Law and Order league organization formed in 1898 to “pledge a given sum each month for the prosecution of the violators of the prohibitory (temperance) law.”  His business survived the transition from horses to autos changing from a livery to a transfer and storage company.  Fire damaged or destroyed the livery several times.  David just rebuilt.

As a couple they endured the death of their infant children in Newton and saw the birth of two children—Ruth (1892) and Willard (1897). 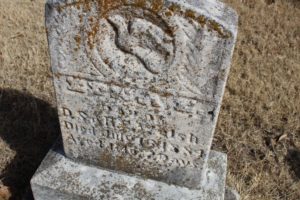 Brief notices in the Evening Kansan Republican tell the story of children lost.

“Georgie, the little daughter of Mr. and Mrs. D.S. Welsh, died Saturday night of diphtheria.  She was a bright little girl and was seventeen months old…” (23 Dec 1889)

“She was known in Newton, having resided here for a time with Mr. Welsh’s family.  Mrs. McCray was an active member of the Methodist church and for a quarter of a century practiced medicine.” 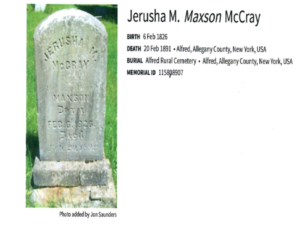 How did Ella manage to juggle all her roles?  Household chores could take a lot of time out of a woman’s day. So appearing in the Evening Kansan-Republican on Nov 3, 1908 was this ad.

Franklin D. Roosevelt had won the 1932 election.  Part of his platform was ending Prohibition.  That happened in 1933.  It must have been a great disappointment to Ella.  She had spent almost all her adult life fighting for temperance.

Ella died November 30, 1934 at the home of her daughter.  Her body was brought back to Newton the following week and a funeral attended by many took place.  She was buried beside David.  A helpmate to her husband, respected by her children, active in her church, leadership roles in local temperance and suffrage associations; Ella Welsh served the Newton community in many capacities—a life well-lived.