While pulling out objects for the Back to the 80s exhibit, I discovered two silver spoons and not just ordinary spoons.

An etching of a school building is on the “spoon” part with a decorative handle that features a “Chief.” The words “High School Building, Newton, Kas” across the top part of the spoon.

In 1888, two new school buildings were constructed, the High School,  later named Cooper School, and McKinley School. Perhaps the spoon was created as a memento from the dedication of the new high school in 1888.

The second spoon seems to have been a graduation keepsake. The school is identified as “Cooper School” and the handle is designed to be a young woman graduate.  A closer looked revealed the name “Estelle” engraved on the diploma in the woman’s hands. 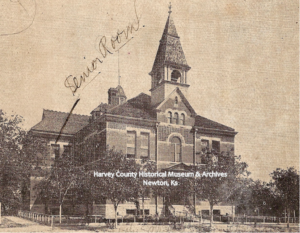