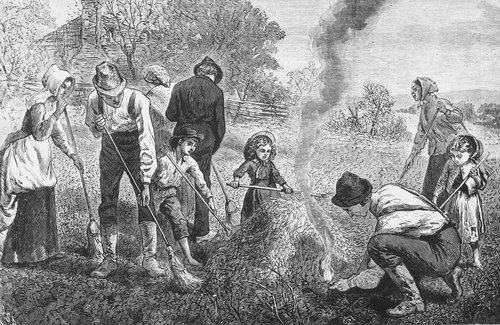 Clearing a field of grasshoppers. The “Good Old Days” were difficult. A great wind and rain storm damaged parts of Harvey County in June of 1871. Judge Muse wrote about an October 1871 calamity in which “a very severe and cold storm of hail, sleet and snow passed over Harvey County…hundreds of cattle in all parts of the county perished….” The grasshopper plague of 1874 impacted the prairies from the Dakotas to Texas. Judge Muse reported the arrival of the insects in Harvey County in August. Huge swarms blocked out the sun. They ate crops, paper, tree bark, and wooden tool handles. Muse said this was the County’s second grasshopper invasion with the first occurring in 1860. During the 1874 “scourge,” the grasshoppers ate or destroyed within two or three weeks every stalk of corn and all green vegetation in Harvey County. An economic crisis occurred in 1873. From the late 1880s to the early 1890s, farmers experienced a series of difficult years due to droughts and the resulting crop failures. For a number of years, the political and social climate of the county had an undercurrent of jealousy and resentment since hard feelings festered in Burrton, Halstead and Sedgwick over Newton’s designation as county seat. The three smaller towns felt they were underserved due to Newton’s size giving it more clout. Credit: Kansas Historical Society. http://www.kshs.org/kansapedia/grasshopper-plague-of-1874/12070